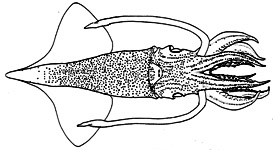 Abralia andamanica is broadly distributed and associated with shelf waters of the Indo-West Pacific. A very long, conical tail is characteristic of this species.

A. andamanica robsoni Grimpe, 1931 was described as a subspecies from Japanese waters with a linear photophore arrangement on the ventral head, but is considered to be a synonym (Tsuchiya and Okutani, 1989).

This species was first described from the Andaman Sea, Indian Ocean. It is distributed widely from Sagami Bay, Central Japan through the East China Sea, and shelf waters of Southeast Asia, to the northern coast of Australia and the Indian coast.