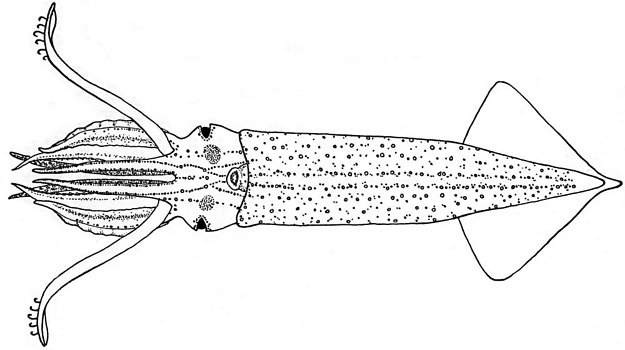 A. multihamata is a species endemic to the shelf waters along the south of Sagami Bay, Japan to Taiwan and off Papua New Guinea. It is characterized by the scattered arrangement of ventral mantle photophores, six club hooks, and more than five eye photophores of two types. The taxonomic status with A. spaercki is problematic.

Spent specimens are collected in large number from the East China Sea in October by bottom trawl.

A. multihamata is possibly bottom associated or mesopelagic boundary species. Specimens were collected by bottom trawl from the East China Sea.

This species was first described from Taiwan waters. It is distributed in shelf waters of the East China Sea, northward to Sagami Bay and the eastern sector of the Japan Sea. It is also found in the South Pacific off Papua New Guinea.

Sasaki, M. 1929. A Monograph of the Dibranchiate Cephalopods of the Japanese and Adjacent Waters. Journal of the College of Agriculture, Hokkaido Imperial University,357 pp.