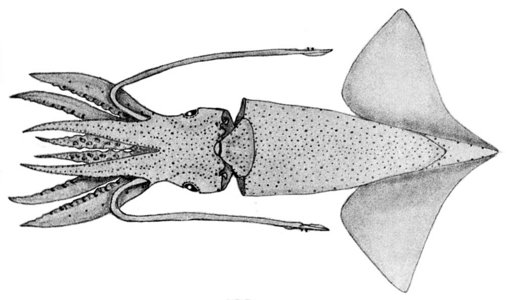 A. trigonura belongs to the Heterabralia subgenus. It is characterized by having two or three hooks on the manus, the left arm hectocotylized, and complex eye photophores. This species resembles A. andamanica but  the latter is separable by its robust tail and dark body color. 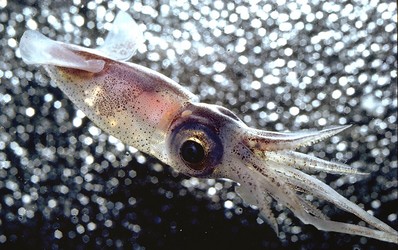 Figure. Photograph of a live A. trigonura in a shipboard aquarium, Hawaiian waters. Photograph by R. Young.

Female longevity is up to 6 months, and sexual maturity is reached at 3.5 months. Male longevity is the same as female, and sexual maturity is reached at 2.5 months. The smallest mature female is 31mm DML, and 80% of females are mature at 35mm DML. Males sexually mature between 23-27mm DML. This species seems to be a multiple spawner, and females spawn eggs every few days. Female batch fecundity was roughly 290-430 eggs (Young and Mangold, 1994). 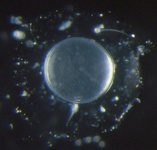 Figure. Left - "Egg" (actually early embryo) of A. trigonura taken from a plankton tow off Hawaii. The egg is surrounded by a gelationus oviducal secretion with debris attached. Right - Newly hatched paralarva of A. trigonura. Photographs by R. Young. 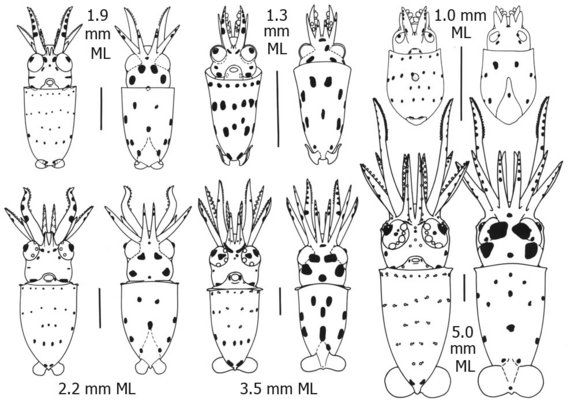 This species is broadly distributed in tropical West to Central North Pacific (Hidaka and Kubodera, 2000).

Hidaka, K. and T. Kubodera. 2000. Squids of the genus Abralia (Cephalopoda: Enoploteuthidae) from the western tropical Pacific with a description of Abralia omiae, a new species. Bull. Mar. Sci. 66: 417-443.

Figures from Burgess (1991) are printed with the Permission of the Bulletin of Marine Science.

Page: Tree of Life Abralia trigonura Berry 1913. Authored by Kotaro Tsuchiya and Richard E. Young. The TEXT of this page is licensed under the Creative Commons Attribution-NonCommercial License - Version 3.0. Note that images and other media featured on this page are each governed by their own license, and they may or may not be available for reuse. Click on an image or a media link to access the media data window, which provides the relevant licensing information. For the general terms and conditions of ToL material reuse and redistribution, please see the Tree of Life Copyright Policies.