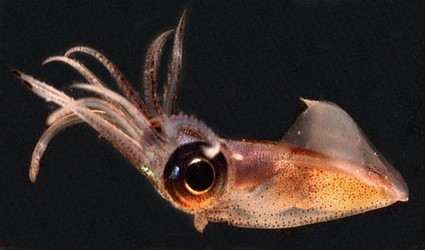 Species of Abraliopsis are small squids that are most easily recognized by spherical "black" photophores (usually three) at the tip of each Arm IV. The black appearance is due to black chromatophores that typically cover the photophores but when the latter luminesce, the chromatophores withdraw from the photophores. This feature is shared with Watasenia scintillans from waters around Japan.

As in most other genera of the family, Abraliopsis has three types of integumental photophores covering the arms, head, funnel and mantle. The right-hand photo above shows the ventral surface of the head and funnel. The most complex of the integumental photophores have red color filters. The other two types appear as blue photophores with white cores in the photos and can be separated only by size in these pictures. Large white ocular photophores are also easily seen through the skin.