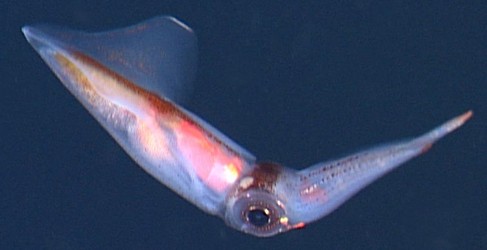 A. felis is the only cool-temperate species in the genus Abraliopsis. It is found in the Kuroshio-Oyashio transition zone and the California Current.

A. felis is the only species, with the possible exception of A. hoylei, characterized by having a scattered arrangement of integument photophores and lacking the carpal flap.

The photograph below appears to show the tentacles of A. felis locked together while swimming but not attempting to catch prey. The feature of locking of tentacles together, unrelated to feeding, appears to be common among many oegopsid squids judging from MBARI photographs. 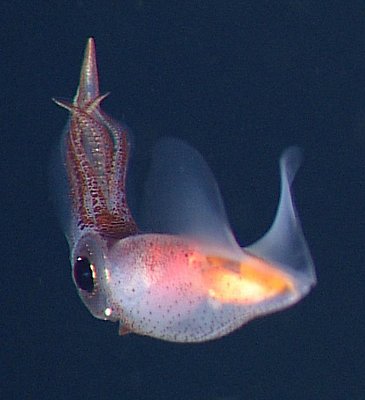 Figure. Posterolateral view of A. felis taken in situ at 362 m from an ROV in Monterey Canyon. © 2013 MBARI.

In the Kuroshio-Oyashio transition zone, this species were occurred abundantly between 0-50m during night.

A. felis is the only cool-temperate species in the genus Abraliopsis. Its distribution extends from the northern Northwest Pacific at 145° E along the Kuroshio-Oyashio transition zone, eastward to northwestern coast of America, and in the California Current southward to northern Baja California (Young, 1972).

Page: Tree of Life Abraliopsis felis (McGowan and Okutani 1968). Authored by Kotaro Tsuchiya and Richard E. Young. The TEXT of this page is licensed under the Creative Commons Attribution-NonCommercial License - Version 3.0. Note that images and other media featured on this page are each governed by their own license, and they may or may not be available for reuse. Click on an image or a media link to access the media data window, which provides the relevant licensing information. For the general terms and conditions of ToL material reuse and redistribution, please see the Tree of Life Copyright Policies.