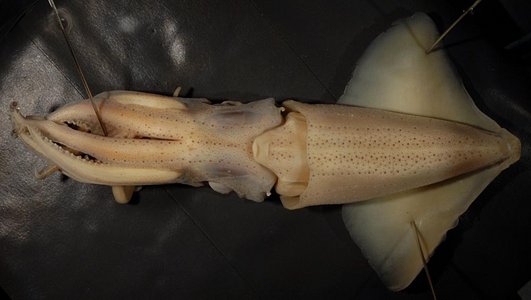 Abraliopsis (Pfefferiteuthis) sp. V is one of the more distinctive species in the subgenus.  Its size is a bit smaller than other members of the subgenus, reaching lengths of 28 mm ML in males and 35 mm ML in females. Known in the Central North Pacific from the equator to Hawaii (rare in Hawaii) and also a single record near New Guinea. 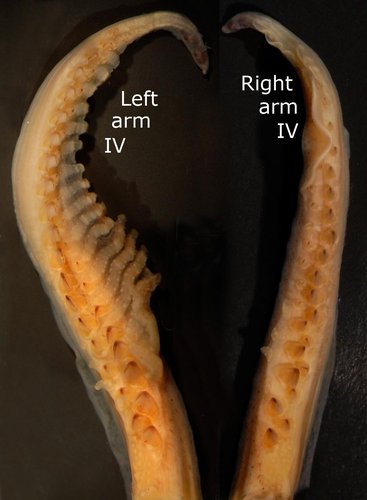 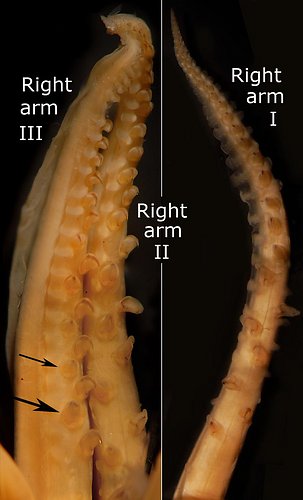 While the abundance of blue photophores in the Lateral head and Central Arm IV Sectors is unique among A. (Pfefferiteuthis) spp., it is similar to that found in A. (Micrabralia) spp. NC1 and NC2. Therefore the identification of females (lack the characteristic A. (Pfefferiteuthis) male arms IV) requires some care. The tentacle clubs are similar only to those of A. falco within the subgenus but they are similar to those of A. lineata within A. (Micrabralia). The most distinctive feature of females, unique to this species, is the enlargement of hooks on arms I.

Comparisons of all species in the subgenus can be found on the Abraliopsis (Pfefferiteuthis) page.

A. (Pfefferiteuthis) sp. V is presently known only from the central tropical Pacific.

Correspondence regarding this page should be directed to Lourdes Burgess at and Richard E. Young at

Page: Tree of Life Abraliopsis sp. V. Authored by Lourdes Burgess and Richard E. Young. The TEXT of this page is licensed under the Creative Commons Attribution-NonCommercial License - Version 3.0. Note that images and other media featured on this page are each governed by their own license, and they may or may not be available for reuse. Click on an image or a media link to access the media data window, which provides the relevant licensing information. For the general terms and conditions of ToL material reuse and redistribution, please see the Tree of Life Copyright Policies.