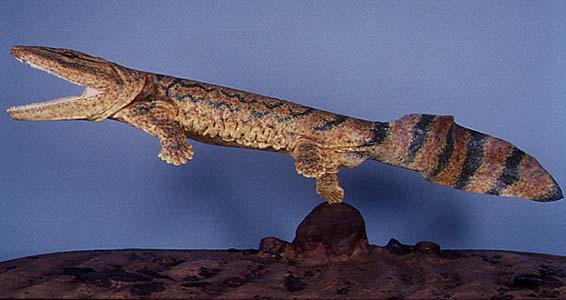 Acanthostega gunnari (Jarvik 1952) is one of a small but increasing number of genera of stem-tetrapods known from the Upper Devonian, which are providing an expanding view of the appearance of tetrapods and the origin of limbs with digits (Coates and Clack 1990, Clack and Coates 1995, Gould 1991, Pough et al. 1996, Thomson 1993, Zimmer 1995, Clack 2002a). Acanthostega is represented by exceptionally well-preserved material. Notable features are the well-ossified gill arches combined with post-branchial lamina of the shoulder girdle, together suggesting retention of functional internal gills; paddle-like limbs with eight digits on each limb and a deep tail supported by finrays and accessory internal supports (Coates 1996). It comes from the Celsius Bjerg Group of the Famennian of East Greenland, which date from about 360 mya.

Most phylogenetic analyses place Acanthostega as one of the most primitive known tetrapods, below Ichthyostega in most trees (eg. Clack 2002b, Ruta et al. 2003). However, it may lie above the recently described Ventastega (Ahlberg and Clack 1998).

The author regrets the move to restrict the vernacular term ‘tetrapod’ to a crown clade (Gauthier et al. 1989), thus forbidding its use in the etymological sense to mean animals with four legs (tetra = four, pod = leg). In this page, the term ‘tetrapod’ and ‘stem-tetrapod’ refer only to vertebrates with limbs and digits. (Refer to the note on the Definition of the taxon Tetrapoda to get more information on this topic.)

The skull roof retains a number of primitive characters such as paired median rostrals, anterior tectals and preoperculars (bones lost in most other tetrapods), and shows unique ones including a dart-shaped supratemporal and a tabular with both a posteriorly directed horn, and an embayment which may have housed a persistent spiracle (Figs 2 and 3). It lacked an intertemporal. The external nostrils were small and placed close to the jaw margin (Clack 1994a,2002c, 2003).

The closed palate bore large fang-pairs on the vomer, as well as an outer row of smaller teeth and denticles, carried posteriorly along the palatines and ectopterygoids (Clack 1994a).

The braincase structure falls between that of Eusthenopteron and more derived stem tetrapods such as embolomeres. It was notochordal, with small exoccipitals. The large fenestra vestibulae accommodated the head of the stapes. The margins of the fenestra were formed by the basioccipital and otic capsule (see also Sensory Organs below). The basipterygoid processes were large and bifaceted as in other stem-tetrapods (Clack 1994b, 1998).

The hyobranchial elements were fully ossified and deeply grooved as in a lungfish such as Neoceratodus, except that they are strongly ossified whereas in Neoceratodus they remain cartilaginous. The grooves would have housed the afferent branchial artery carrying blood to the internal gills, which are thus inferred to have been functional (Coates and Clack 1991). The stapes was a short stout bone with a large proximal footplate and a flared distal end (Clack 1989, 1994b).

The slender lower jaw, in addition to the usual complement of bones, included a Meckelian bone and a parasymphysial dental plate. The prearticular was long and bore an area of shagreen dorsally. It was not sutured ventrally to the surangular, angular or postsplenial and its lower margin accommodated small Meckelian fossae. These features appear to be primitive. The coronoids bore a row of small teeth and denticles similar to that of the palate but there were no fang-pairs as there are in osteoplepiforms. The dentary housed smaller and more numerous teeth (about 75) than the maxilla plus premaxilla (about 60)(Ahlberg and Clack 1998).

The small naris may not have been used for breathing air as in modern tetrapods, but given the fish-like construction of the palate, naris and choana may have been used for chemosensory purposes as assumed for osteolepiforms (Clack 1994a). The eyes, supported by a ring of sclerotic plates, were enlarged relative to osteolepiforms. The lateral line organs were contained in tubes running through the dermal bones, opening by a series of pores. The fenestra vestibulae (fenestra ovalis) accommodated the footplate of the stapes but the construction of the margin excluded the basisphenoid, as in the fish vestibular fontanelle. Internally, the otic capsules were poorly ossified. The stapedial footplate was large relative to the size of the braincase, and the stapes, though short compared with a fish hyomandibula, was nevertheless a stout bone (Clack 1989, 1994b). The system exhibits none of the degree of differentiation and refinement seen in modern tetrapods with tympanic ears. The stapes formed the only bony link between the braincase and the palate, apart from the basal articulation, and may have acted as a brace between the two. It may also have provided an origin for spiracle-operating muscles.

In the axial skeleton, about 28 - 30 notochordal, rhachitomous centra bore neural arches which in some cases remained as paired structures. The small atlas arches were set over a large atlantal intercentrum. After the atlas, the arches were little differentiated. Zygapophyses were poorly developed, but accessory articulations were present between some neural spines. In the tail supraneural spines articulated with some of the arches dorsally, to support the tailfin (Fig. 4). Ribs were short in contrast to the overlapping ribs of Ichthyostega (Clack and Coates 1995; Coates 1996).

In Acanthostega, the tailfin bore unjointed, long and numerous lepidotrichia indicating a persistently aquatic animal (see below). As in many early stem-tetrapods, elongate ovoid scutes covered the belly only (Coates and Clack 1995; Coates 1996).

In the shoulder girdle of Acanthostega, the cleithrum and scapulocoracoid were co-ossified, as in Ichthyostega and Hynerpeton. Dorsally the anocleithrum was a primitive retention, as in Tulerpeton. An incurved flange called the postbranchial lamina ran down the leading edge of the shoulder girdle. In fishes this lamina forms the back of the opercular chamber and helps direct water out of it (Coates and Clack 1991; Coates 1996).

The humerus was L-shaped and flattened, with accessory foramina like those found in Ichthyostega. Radial and ulnar condyles were terminal. The radius was flattened with a spatulate end, and much longer than the triangular ulna, proportions only seen elsewhere in fishes such as Eusthenopteron. The ‘elbow’ joint would have been held more or less straight, and the ‘wrist’ was a diffuse structure formed around the arc encompassing the long radius and short ulna. Only the intermedium is certainly identifiable in the carpus (Fig. 5). There were eight digits (Coates and Clack 1990, Coates 1991, Gould 1991).

The hindlimb was a paddle-like structure with similarities to that of Ichthyostega. The femur was relatively slender with a large rectangular adductor blade placed midway along its length. The tibia and fibula were flattened and overlapped each other slightly in life in a manner suitable for twisting in a swimming stroke but not for bending at the ‘knee’. The ‘ankle’ consisted of a few flattened tarsals, with no obvious ankle joint . At least eight digits were present (Coates 1991, 1996).

Most Acanthostega specimens came from one site representing a point bar in an active river channel, where a series of burial events took place, resulting in deposition of several well-articulated specimens. These are interpreted as having been deposited in a flash-flood. The good preservation of these specimens sugests that they had not been carried far, and thus that the animals inhabited these channels. A few isolated holoptychiid and lungfish scales and bones were also found in this lens. In other localities yielding Acanthostega material, Ichthyostega, Holoptychius, Eusthenodon, lungfish and placoderms also occur (Bendix-Almgreen, Clack and Olsen 1990).

Acanthostega is interpreted as a primarily if not entirely aquatic animal, based on the form of the limb joints and digits, the extensive tail fin, notochordal vertebrae, lack of zygapophyses, short ribs with poorly differentiated sacral rib, postbranchial lamina, well-ossified hyobranchial apparatus, fish-like dentition retaining large vomerine fangs, lateral line organs embedded in bone, small naris, large stapes, and possibly functional spiracle. It also retains a number of primitive features independent of its aquatic life, such as the notochordal braincase, form of the fenestra vestibulae, persistent embryonic braincase fissures, fish-like occiput, anocleithrum, form of the scapulocoracoid-cleithral complex, relative lengths of radius and ulna, retention of dermal fin rays and supraneural spines. The large number of digits fits the hypothesis that early in limb evolution, digit number was not fixed. All of these characters suggest that not only was Acanthostega aquatic, but that it was primitively so, and not derived from a more terrestrial forebear. Its structure supports the idea that limbs with digits evolved for use in water, only later to be used on land, rather than the more conventional view that it was among sarcopterygian fishes that excursions over land first began (Clack 1997, Clack and Coates 1995, Coates and Clack 1995).

Clack, J.A. 1994a. Acanthostega gunnari, a Devonian tetrapod from Greenland; the snout, palate and ventral parts of the braincase, with a discussion of their significance. Meddelelser om Grønland: Geoscience, 31: 1-24.

Clack, J A. 1997. Devonian tetrapod trackways and trackmakers; a review of the fossils and footprints. Palaeogeography, Palaeoclimatology and Palaeoecology, 130: 227-250.

Clack, J.A. 1998. The neurocranium of Acanthostega gunnari and the evolution of the auditory region in tetrapods. Zoological Journal of the Linnean Society. 122:61-97

Clack, J. A. 2003 A revised reconstruction of the dermal skull roof of Acanthostega, an early tetrapod from the Late Devonian. Trans R. Soc. Ed. Earth Sciences: 93, 163-165

I would like to express my grateful thanks to Michel Laurin for guiding me through the production of these pages and for editing the result. I would also like to thank David Maddison for scanning in the images for me, and Katja Schulz for finalising the appearance of the pages.

Correspondence regarding this page should be directed to Jennifer A. Clack at