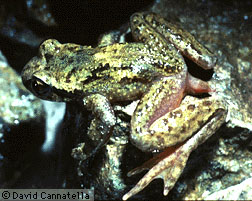 In part from Ford and Cannatella (1993)
Containing group: Salientia

The tailed Frog gets its name from the copulatory organ of the male, which resembles a short tail. This is one of the very few frogs with internal fertilization; the copulatory organ is used to transfer sperm to the female. It inhabits cold streams in humid forests and the areas around them. Ascaphus ranges from British Columbia south to Mendocino County, California, the Rocky Mountains of Idaho and Montana, and adjacent Washington and Oregon. It is not known to have an advertisement call. Ascaphus is semi-aquatic and is most active in the vicinity of streams at night.

Its tadpole has a large suckerlike mouth that occupies about one-half of the ventral surface of the body. It also has a large number of denticles (2-3 upper and 7-12 lower rows). Ascaphus uses its sucker and denticles to adhere to and move among rocks in the cold swift streams. Tadpoles of most species of frogs have only two upper and three lower rows of denticles.

The distribution of living Ascaphus is indicated in red.

Ascaphus and Leiopelma generally have been placed in the same family, sometimes called Ascaphidae. This arrangement has always been recognized as one based on symplesiomorphy (Green and Cannatella, 1993). The synapomorphies of Leiopelmatanura (below) indicate the relationship of Leiopelma to other frogs.

Ascaphus truei is the sister-group to the clade of all other living frogs, which was named Leiopelmatanura by Ford and Cannatella (1993). Cannatella (1985) described synapomorphies of Leiopelmatanura: elongate arms on the sternum; loss of the ascending process of the palatoquadrate; sphenethmoid ossifying in the anterior position; the root of the facial nerve exits the braincase through the facial foramen, anterior to the auditory capsule, rather than via the anterior acoustic foramen into the auditory capsule (Slabbert and Maree, 1945; Stephenson, 1951); and a palatoquadrate articulation with the braincase via a pseudobasal process, rather than a basal process (Pusey, 1943).

Green et al. (1989) concluded on the basis of an allozyme study of 36 loci that Leiopelma was the sister-group to Ascaphus and all other frogs (represented by Bombina and Discoglossus), based on an UPGMA phenogram and a midpoint-rooted Fitch-Margoliash tree. However, their tree can be re-rooted such that Ascaphus is the sister-group to all other frogs, without increase in the % standard deviation, a measure of goodness-of-fit. Such a re-rooting would violate only slightly the assumption of rate homogeneity, which was the basis of the midpoint rooting.

Most recently Hay et al. (1995) analyzed relationships among families of frogs using 12S and 16S rRNA and found Ascaphus and Leiopelma to be sister-groups.

Amphibian Species of the World Accounts