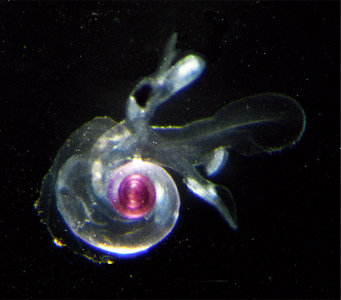 Atlanta echinogyra is a small species (to 2.5 mm shell diameter). The shell is colorless, although the tissues underlying the shell spire give it a red-violet to red-brown color. The spire is low conical and consists of 3-3/4 whorls. The spire whorls have incised sutures and bear low spiral ridges on the second through most of the fourth whorls. The outer edge of the third and fourth whorls have a raised ridge (seen best in the larval shell). The keel is moderately elevated with a slightly truncate leading edge. The keel does not insert between the last two shell whorls. The keel base is either clear or brown. Eyes type a. Operculum type c, with a gyre that bears a raised spiral row of strong, distally-tapering spines (hence the specific epithet, "echinogyra"). Radula type I, with unlimited numbers of tooth rows and lacking sexual dimorphism. Geographic distribution Indo-Pacific. Vertical distribution limited to the upper 100 m in Hawaiian waters.

Atlanta echinogyra was described in 1972 by G. Richter based on specimens collected during the Meteor Expedition to the northern Indian Ocean. Richter named the species after the unique structure of the opercular gyre, with its raised spiral row of spines (see second SEM image of the operculum above).

In the plankton samples from the Meteor Expedition studied by Ricther (1974), Atlanta echinogyra was the fourth most abundant species of heteropod (accounting for 9.1% of the total). By contrast, the species was uncommon off northeastern Australia (ranking nineth, accounting for 1.5% of the total number of heteropods collected) in a study by Seapy et al. (2003). In Hawaiian waters A. echinogyra was variable in its presence and numbers among different collections, ranking eleventh out of thirteen species of atlantids (Seapy, 1990a); from five different sampling periods between 1984 and 1986, it was not collected twice, was represented by a single individual once, and by 27 and 19 individuals in two collections. In eastern Australian waters, Newman (1990) recorded A. echinogyra as rare in northern and central Great Barrier Reef waters. Thus, it would appear that in the Pacific and Indian Oceans, A. echinogyra is only abundant in the northern Indian Ocean.

Page: Tree of Life Atlanta echinogyra Richter 1972. Authored by Roger R. Seapy. The TEXT of this page is licensed under the Creative Commons Attribution License - Version 3.0. Note that images and other media featured on this page are each governed by their own license, and they may or may not be available for reuse. Click on an image or a media link to access the media data window, which provides the relevant licensing information. For the general terms and conditions of ToL material reuse and redistribution, please see the Tree of Life Copyright Policies.