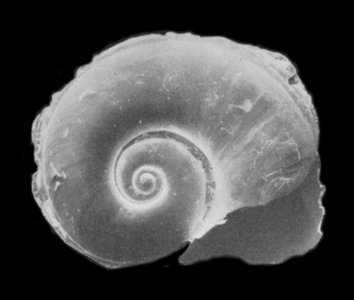 Atlanta rosea attains a moderately large size (to 5 mm). Its shell morphology is very similar with that of A. peronii, with which it was synonymized in 1908 and remained so until 1993, when it was shown to be a valid species. The distinguishing features of its shell that separate it from other members of the A. peronii species group are the low rounded (or globular) spire and the very shallow spire sutures of the first 2-1/2 whorls. The shell is transparent to faintly yellow. The body coloration and keel base are rose colored, according to Souleyet who described the species in 1852. The larva is bright pink, which distinguishes it from the larvae of other species in the A. peronii species group. Eyes type b. Operculum type b. Radula type II. The species is circumglobal in tropical to subtropical waters, and is regarded as rare. Nothing is known of its vertical distribution.

Souleyet described Atlanta rosea (under the vernacular name Atlante rose) from specimens collected by the Bonite Expedition in the western Pacific Ocean. He regarded A. rosea as most closely related to A. peronii, citing a larger spire size in A. rosea, and naming the species on the basis of the rose color of the body and keel base. Tesch (1906, p. 10) reported A. rosea from samples collected during the Siboga Expedition to the East Indies. However, in his revision of the genus Atlanta in 1908, Tesch rejected A. rosea as a valid species, designating it as a junior synonym of A. peronii. Subsequent authors (notably Tesch, 1949 and van der Spoel, 1976) accepted Tesch's merger of A. rosea with A. peronii.  But in a 1993 paper on the species comprising the A. peronii species group, Richter (1993) provided conclusive proof that Souleyet was correct in treating A. rosea as species distinct from A. peronii. The primary difference in the shells was in the rounded spire shape and shallow suture in the early spire whorls of A. rosea. These differences in the spires of A. rosea and A. peronii are clearly seen by Richter's dark field photographs of the larval shells of the two species in apertural view (see below). 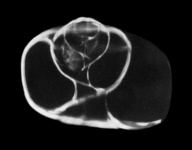 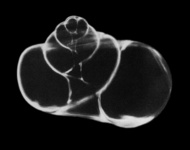 In a paper on the heteropods of the South Atlantic Ocean, Richter (in Richter and Seapy, 1999: 638) stated that "in 1908 Tesch united A. rosea with A. peroni probably because the holotypes in the Musee d'Histoire Naturelle de Paris were already badly damaged (shells dissolved) when he had the opportunity to study them. Comparing "aberrant" shells of A. peroni from the Indian Ocean and the tropical Atlantic Ocean with the type shells of Souleyet, preserved dry in the British Museum, London, Richter (1993) found that they belonged to this very species.

Other Names for Atlanta rosea Gray 1850

Page: Tree of Life Atlanta rosea Gray 1850. Atlanta rosea Souleyet 1852. Authored by Roger R. Seapy. The TEXT of this page is licensed under the Creative Commons Attribution License - Version 3.0. Note that images and other media featured on this page are each governed by their own license, and they may or may not be available for reuse. Click on an image or a media link to access the media data window, which provides the relevant licensing information. For the general terms and conditions of ToL material reuse and redistribution, please see the Tree of Life Copyright Policies.