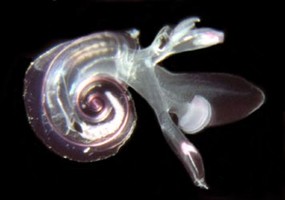 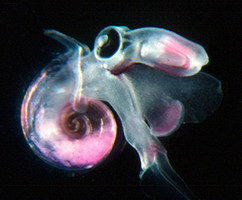 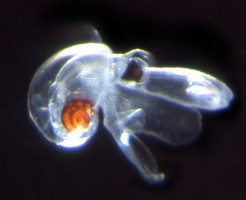 Atlantids are the most species-rich family of heteropods, containing over 60% of all species. They are microscopic (<1 cm shell diameter), and bear a coiled shell into which they can retract their bodies. After retraction into the shell, the shell aperture is closed off by a chitinous operculum attached to the opercular lobe of the foot. The head has a pair of large tentacles anterior to the eyes. A large muscular sucker, located on the posteroventral margin of the swimming fin, is used to hold prey fast while feeding. Atlantids are found primarily between the surface and 200 m in tropical to subtropical waters. Many species undergo vertical migration from daytime depths into shallower waters at night.

A family of heteropods with: 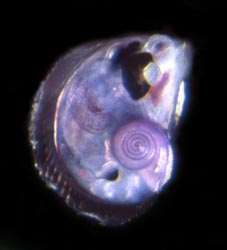 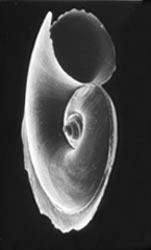 Because of the presence of a shell, sinking should be a major problem in the atlantids. As noted elsewhere, the carinariids and pterotracheids have enlarged, elongated bodies containing gelatinous tissues in which heavier sulfate ions are replaced by lighter chloride ions to achieve neutral buoyancy. Laboratory observations of Oxygyrus keraudreni by Land (1982) have shown that animals will alternately swim upwards for several seconds and then sink back down with their bodies extended from their shells for about 10 seconds.  In-situ field observations of atlantids at night by Gilmer (in Lalli and Gilmer, 1989) indicated very different behavior than was exhibited during the day. Individuals were motionless, attached to long strands of mucus that appear to originate from the foot. 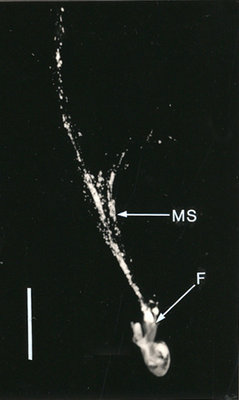 Figure. In-situ photograph of an unidentified atlantid attached to mucus strands (= MS), that extend about 45 mm above the animal. Note that the mucus appears to come from the foot (= F). Photograph modified from Lalli and Gilmer (1989, fig. 11). © 1989 Ronald Gilmer