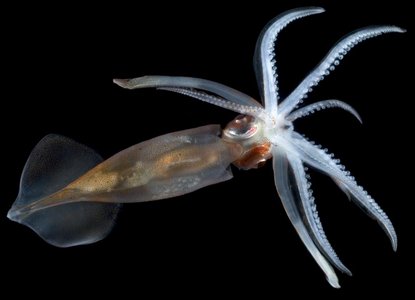 Little is known about the biology of brachioteuthids although Roper and Vecchione (1996) describe an accumulation of Brachioteuthis beanii observed from a submersible near the ocean floor at a depth of about 800 m. An AVI format video clip of a squid from this aggregration is available here.

Members of the family have characteristic paralarvae. The paralarvae have long necks containing a fluid-filled sac that extends as a reservoir into the body (Young, et al., 1985). Contraction of the reservoir can greatly increase the length of the neck, thereby extending the head from the mantle. This trail is present at hatching. 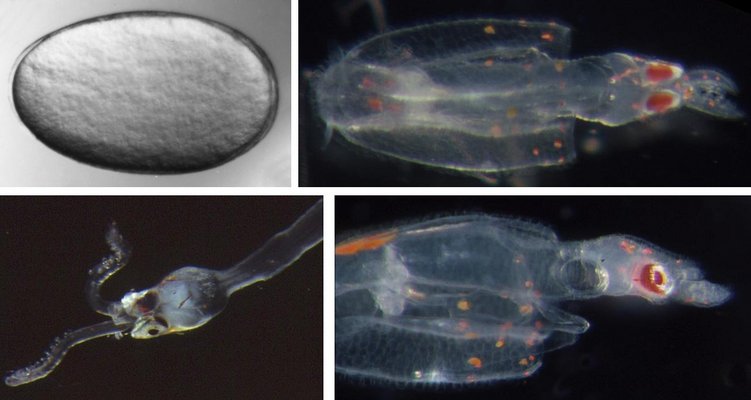 The photograph below was taken scuba diving at night off the leeward coast of Hawaii Island.  This paralarva (ca. 6-10 mm ML) appears to have a maximum extension of its neck.Paralarvae are illustrated below showing change in form and chromatophore patterns.

Paralarvae are illustrated below showing change the in form and chromatophore patterns with growth. 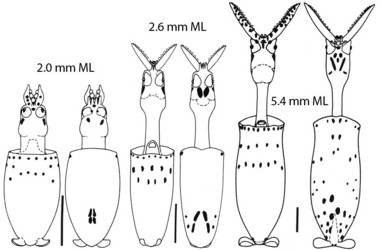 Figure. Ventral and dorsal views of four paralarval stages of Brachioteuthis sp., Hawaiian waters. Scale bar = 1 mm. The thumbnail at the left shows the relative sizes of the four stages - click it for a larger view. Drawings from Young et al. (1985).