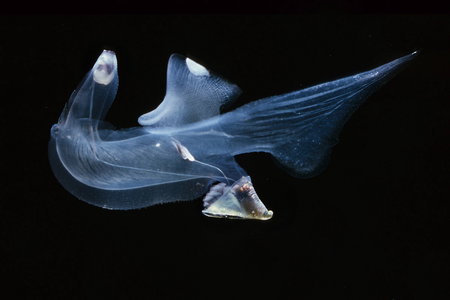 Carinaria japonica is a moderately large species, achieving a maximal body length of 105 mm. The shell is compressed laterally and, when viewed from the side, is triangular in shape with a height to basal length ratio of 0.8-1.0. The keel is low initially, but increases in height with shell growth. The tail is moderately well-developed and has a prominent dorsal crest. The geographical distribution of the species is unique among carinariids; it is limited to the cool, temperate waters of the Transition Zone in the North Pacific Ocean.

A species of Carinaria with:

The geographic distribution of Carinaria japonica is restricted to Transition Zone Faunal Province in the North Pacific Ocean (McGowan, 1971; Seapy, 1974). This faunal province consists of a narrow band of surface water at the Subarctic Boundary (located between the Subarctic Pacific and Central Pacific water masses at about latitude 40-41°N), extending eastward from Japanese waters and broadening as it approaches the coast of North America to extend southward as the broad California Current.

Among the species of Carinaria, the feeding habits and food preferences of C. japonica have been most thoroughly studied (Seapy, 1980). Thaliaceans (small doliolids and salps), chaetognaths and copepods dominated numerically in the diet. Comparisons of the proportion of each prey species in the diet and available in the plankton indicated preferential feeding on thaliaceans, chaetognaths and mollusks. In contrast crustaceans, and particularly copepods, were non-preferred prey. These prey preference patterns may reflect differences among prey species in their ability to escape capture.

Page: Tree of Life Carinaria japonica Okutani 1955. Authored by Roger R. Seapy. The TEXT of this page is licensed under the Creative Commons Attribution License - Version 3.0. Note that images and other media featured on this page are each governed by their own license, and they may or may not be available for reuse. Click on an image or a media link to access the media data window, which provides the relevant licensing information. For the general terms and conditions of ToL material reuse and redistribution, please see the Tree of Life Copyright Policies.