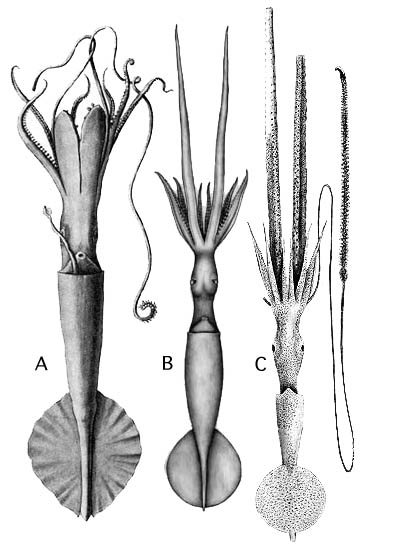 The holotype is deposited in the Zoological Museum, University of Copenhagen, Denmark
Containing group: Chiroteuthis

C. mega has a similar tentacular club to that of C. picteti but is easily recognized by the absence of visceral photophores. Other unusual features are the arrangement of ocular photophores, the slenderness and elongation of the mantle, head and arms IV, and very long clubs with an especially large club-tip photophore.

Chiropsis mega was described by Joubin in 1932 in a preliminary note on the male reproductive system and subsequently described and illustrated in detail in 1933. The single specimen, captured in the Sargasso Sea of the North Atlantic, was unusual in having short, broad ventral arms (thought to be hectocotylization by Joubin), a very short tentacular club, a single visceral photophore and a large penis. Our examination of the holotype found this squid to be an injured animal that had begun to heal damaged ventral arms and its remaining single club. The visceral photophore was actually a bend in the cephalic vein and visceral photophores are lacking. The absence of the visceral photophores is the main distinctive feature of the species. The large penis seems to be a characteristic of the genus Chiroteuthis. Therefore, the generic status of Chiropsis is untenable. MacDonald and Clench (1934) described a new genus and species, Bigelowia atlanticus, from the western North Atlantic off Bermuda from the same general region where C. mega was captured. The species was based on a single, mutilated specimen and was characterized by its very elongate, slender head and mantle. Roper et al. (1969) placed Bigelowia in the synonomy of Chiroteuthis. Our re-examination of the holotype of B. atlanticus shows that visceral photophores are absent and that the species is a synonym of C. mega. Finally, Voss (1967) described Chiroteuthis capensis from well preserved material from South Atlantic waters off South Africa. The most distinctive feature was the absence of visceral photophores which was thought to be a unique character at that time. This species was placed in the synonomy of C. mega by Salcedo-Vargas (1997) based on his re-examination of the holotypes of C. mega and C. capensis.

C. mega is known from the North and South Atlantic and eastern North Pacific oceans. Relatively little geographical variation in sucker dentition was noted in either club or arm suckers.