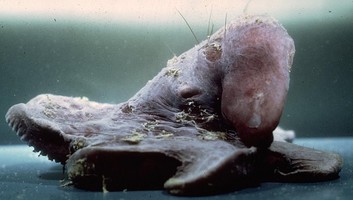 Members of Cirroctopus are more muscular than is typical for cirrate octopods. The fins are extremely large and the eyes tilt dorsally. Members of the genus are restricted to high latitudes of the southern hemisphere. Cirroctopus is probably the most distinctive of the four opisthoteuthid genera.

The four species of Cirroctopus are poorly differentiated at present. Although a few potentially differentiating characters are known, identification must rely heavily on geographic location until the species are better known.

Species of Cirroctopus are known only from Antarctic and Subantarctic waters.

Page: Tree of Life Cirroctopus Naef, 1923. Authored by Michael Vecchione and Richard E. Young. The TEXT of this page is licensed under the Creative Commons Attribution-NonCommercial License - Version 3.0. Note that images and other media featured on this page are each governed by their own license, and they may or may not be available for reuse. Click on an image or a media link to access the media data window, which provides the relevant licensing information. For the general terms and conditions of ToL material reuse and redistribution, please see the Tree of Life Copyright Policies.