Octopods, squids, cuttlefishes and their relatives 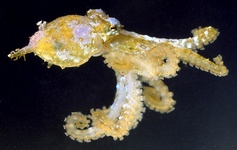 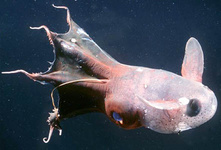 The Coleoidea contains all living cephalopods except for species of pearly nautilus.

The Coleoidea contains two subdivisions. One, the Belemnoidea, had members that were common inhabitants of neritic waters during the Cretaceous but became extinct and the end of this Period.

The other subdivision, the Neocoleoidea, contains two extant groups: the Octopodiformes (octopods and vampire squid) and the Decapodiformes (squids and cuttlefishes). In addition, a variety of fossil groups exist that may fall into either of these two groups of neocoleoids. The extant coleoids occupy all major habitats in the ocean from intertidal to great depths (deepest record is 7279m, Aldred et al., 1983; Voss, 1988,p. 266) and from south to north polar regions. Although some loliginid squids and some sepiolids can tolerate reduced salinity, no cephalopod occurs in fresh water. In many regions of the oceans, coleoids are dominant members of the ecosystem and are often targets of major fisheries.

Coleoids generally use mantle-generated jet propulsion to obtain high swimming speeds. This is an effective but energetically expensive means of locomotion (Webber and O'Dor, 1985) and, as a result, some groups utilize the fins as the primary locomotor organ. This is especially common in deep-sea species (e.g., cirrate octopods, octopoteuthid squid, magnapinnid squid) where, in dark waters, the value of speed is reduced.

When cephalopods first evolved, the primary feature that separated them from other molluscs was a shell with buoyancy chambers. This allowed cephalopods to invade the pelagic realm where predators and competitors were few. When the shell became internal in coleoids the bouyancy chambers were retained in belemnoids. In most present day neocoleoids, the buoyant shell has been abandoned (it is retained in Spirula and the Sepiidae) and many squids and octopods are negatively buoyant. While this is not a problem for those octopods that are benthic, negatively buoyant squids, however, must swim constantly to stay afloat. Some squids and pelagic octopods, however, have gained near-neutral buoyancy via the retention of light ions (especially ammonium in place of sodium) and the reduction of heavy tissues (Clarke, et al., 1979). This type of neutral buoyancy is found in many deep-sea species since reduction of muscular and cartilagenous tissues can be tolerated in this habitat. In a few cases oil provides buoyancy (Bathyteuthidae) and in one case (Ocythoidae) a true swimbladder has evolved (Packard and Wurtz, 1994).

Coleoid arms are unique grasping structures that possess a variety of different types of suckers and hooks. The arms and suckers are also provided with a variety of sensory organs that can be a primary means of investigating the immediate environment. This is especially true of the octopods where the arms can hunt for unseen prey under rocks. Prey are seized and passed to the mouth then cut into pieces by sharp beaks and swallowed. Because of the circumesophageal organization of the molluscan central nervous system and its elaboration into a complex brain in cephalopods, the cephalopod esophagus passes through the center of the brain; this arrangement limits the maximum size of particles that can be swallowed.

Survival in the sea depends not only on obtaining food but also on avoiding predators. Although preyed upon by many vertebrates (especially marine mammals) and other animals, coleoids excel at camouflage and deception (see Hanlon and Messenger, 1996). They easily exceed all other animals in their ability to change color quickly through the use of chromatophoric organs (chromatophores) and various types of reflectors. The chromatophores contain muscles under nervous control; quick muscle contraction produces rapid color changes that immediately changes the appearance of the animal. This camouflage, combined with their ability to secrete clouds or globs of ink, and the ability of many to alter their skin texture and arm postures, provides them exceptional concealment abilities.

Another, perhaps surprising feature of coleoids, since many species reach a large size, is their short life span. Most species grow rapidly and live for one year or less. Reasons for this are not well understood. However, this is part of a life-history strategy that seems designed for rapid increase in population size. One result of this is that cephalopod fisheries typically fluctuate wildly in annual catch rates.

* presence not established in Belemnoidea.

Many of these characters have been secondarily lost in various taxa.

Arm pairs are counted from dorsal to ventral as indicated in the illustration above. However, the numbering of arms in taxonomic descriptions leads to some ambiguity. In the Decapodiformes, the fourth of five pairs of arms has been modified as tentacles, leaving four pairs of functional arms. As a result, the ventral arms are the true fifth pair but functionally are the fourth pair. Similarly, the second pair of arms is modified in vampyroteuthids and lost in octopods causing a difference between true (i.e., homologous) and functional arm-pair numbering.  True arm-pair numbering is used in the above illustration while functional numbering is used in descriptions of taxa.

Extant coleoids form a monophyletic group, the Neocoleoidea, as evidenced by the uniform presence of suckers. Their sister group, the Belemnoidea, is characterized by the presence of hooks that are derived, perhaps, from muscular papillae, the homologues of trabeculae or cirri that lie lateral to the suckers in living coleoids (e.g. Engeser and Bandel, 1988, see also Haas, 1989).

The Decapodiformes is supported by only a single morphological character that has been demonstrated to be apomorphic (i.e. derived): the modification of the fourth pair of arms as tentacles (Young and Vecchione, 1996). The monophyly, however, is supported by molecular cladistic studies (Bonnaud et al. 1997; Carlini and Graves, 1999). The problem with morphology, however, is not due to a lack of shared character states among decapods but instead results from our inability to polarize these states. The outgroup on which most polarity decisions are based is the Nautiloidea. Unfortunately, this group is morphologically very different from coleoids and many characters are not applicable to both groups.

Young and Vecchione (1996, 2002) found five unambiguous character states that supported the monophyly of the Octopodiformes:

An evolutionary study by Hass (2002) also placed the Vampyromorpha and Octopoda together as a monophyletic group on the basis of a combination of characters four and five above (he independently recognized these characters but defined them slightly differently). Molecular studies support the monophyly of this group (Carlini and Graves, 1999) or give it equivocal support (Bonnaud et al., 1997).

Page: Tree of Life Coleoidea Bather, 1888. Octopods, squids, cuttlefishes and their relatives. Authored by Richard E. Young, Michael Vecchione, and Katharina M. Mangold (1922-2003). The TEXT of this page is licensed under the Creative Commons Attribution-NonCommercial License - Version 3.0. Note that images and other media featured on this page are each governed by their own license, and they may or may not be available for reuse. Click on an image or a media link to access the media data window, which provides the relevant licensing information. For the general terms and conditions of ToL material reuse and redistribution, please see the Tree of Life Copyright Policies.