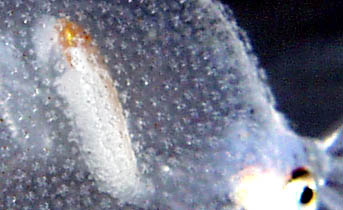 C. scabra, the only species in the genus, is small (150 mm ML) and one of the most distinctive cranchiids.

The mantle is covered by large, multi-pointed cartilagenous tubercles (see Roper and Lu 1990, for a description of the tubercle structure). When disturbed, the squid often pulls its head and arms into the mantle cavity and folds its fins tightly against the mantle to form a turgid ball. The tubercules, presumably, provide some type of protection but it is unclear what predators are affected and how. In addition, the squid may ink into the mantle cavity, making the ball opaque. This was thought to be an aberrant behavior due to stress and confinement of shipboard aquaria until the same inking behavior was seen in cranchiids from submersibles (Hunt, 1996). The function of this behavior is unknown.

The small C. scabra below, photographed in a shipboard aquarium, has retracted its head with arms and tentacles into the mantle cavity. The mantle has taken the shape of a sphere and the chromatophores have expanded. This response to disturbance perhaps makes their consumption by small-mouthed predators more difficult. 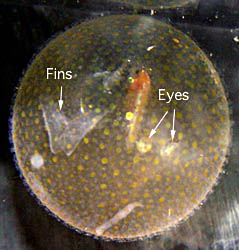 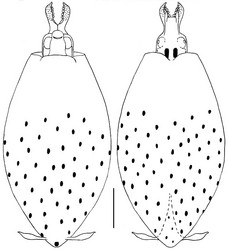 Other Names for Cranchia scabra Leach 1817