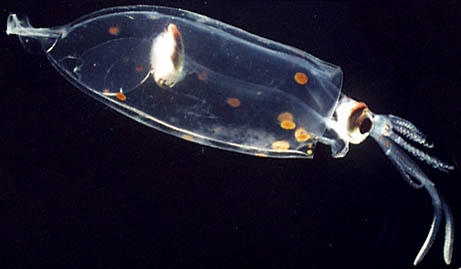 Cranchiids are small (Helicocranchia: ca. 100 mm mantle length [ML]) to large (Mesonychoteuthis: ca. 2000 mm ML) squids that possess a large buoyancy chamber and, hence, the common name "bathyscaphoid squid." In general appearance they often appear to have bloated bodies and short arms. The mantle is generally thin but muscular. Several species have been observed in deep water from submersibles to exhibit a peculiar posture (cockatoo posture) with the arms and tentacles folded back over the head (Vecchione and Roper, 1991). Cranchiid paralarvae are common in near-surface waters and many remain in this habitat until reaching a rather large size (ca. 50-100 mm ML). Most species occupy progressively deeper waters as they grow larger (ontogenetic descent). This is one of the more speciose families of squids with about 60 species, many of which are undescribed (Voss, et al., 1992).

A list of all nominal genera and species in the Cranchiidae can be found here. The list includes the current status and type species of all genera, and the current status, type repository and type locality of all species and all pertinent references.

The phylogenetic relationships shown above are from Voss (1988). An earlier study (N. Voss and R. Voss, 1983) was the first cladistic study undertaken on cephalopods.

Many cranchiids spend much of their life in the upper depths of the ocean in partially sunlit waters. For concealment under these conditions, they are often transparent except for the eyes and the visceral nucleus. The visceral nucleus is generally spindle-shaped and maintains a vertical orientation to minimize the shadow that it casts (Seapy and Young, 1986). The eyes, often with ventral photophores, also maintain a constant orientation not only for concealment but, as in most cephalopods, as a visual aid to assist interpretation of objects in the environment. The ability of cranchiids to maintain the digestive gland in a vertical orientation can be seen the the photographs below. Squid were photographed in a shipboard aquarium with vertical lines placed on the back of the tank. Note the vertical orientation of the visceral nucleus of this squid when its body is in two different postures. 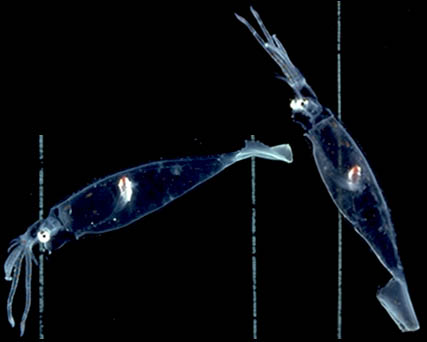 Figure. Side views of Leachia pacifica in different attitudes. Photographs by R. Young.

Probably all species have paralarvae in near surface waters. Some paralarvae reach a large size (ca. 50-100 mm ML) before descending into deep water as juveniles. Paralarvae of most species are easily recognized as belonging to this family by their long eyestalks. This is especially pronounced in paralarval Bathothauma. Many species go through marked morphological change with growth and at maturity. These can involve changing eye shape and position, changing fin shape, increased pigmentation, development of photophores on arm tips, various modifications of arm structure and, apparently, loss of tentacles. These changes have led to many developmental stages being named as separate species or genera.

Based on slim evidence, females seem to be semelparous (terminal spawners).