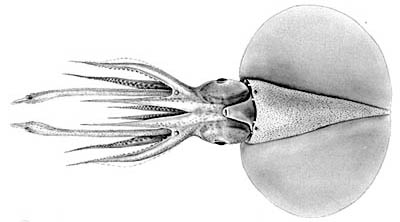 D. laciniosa is most easily separated from its congener by the arrangement of photophores. Virtually nothing is known of its biology.


The smallest known specimen is a paralarva of 5mm ML (drawing). The paralarva is easily recognized by the wide separation of the fins due to the broad gladius, and by the mantle flaps. By 14 mm ML the fins virtually equal the mantle length. Mature squid are unknown.

Young and Roper (1969) were doubtful that the 5 and 9 mm ML specimens belonged to the same species.  Nesis (1982/87) indicates that the mantle flaps/papillae are developed only in juveniles. Apparently the young he had seen, in contrast to the above illustrations, lacked the flaps. This suggests that there may be a variety of species that are close to D. laciniosa.

The little vertical distribution data available suggests that in Hawaiian waters D. laciniosa occupies mesopelagic depths during the day and migrates into epipelagic waters at night.

The type locality is about 40 miles NNE of Bermuda. D. laciniosa occurs throughout the tropical and subtropical Atlantic, Indian and Pacific Oceans (Nesis, 1982/87).

Young, R. E. and C. F. E. Roper. 1969. A monograph of the Cephalopoda of the North Atlantic: The family Cycloteuthidae. Smithsonian Contributions to Zoology No. 5:1-24.