D. gigas is the largest of the ommastrephids reaching a weight of approximately 50kg and a mantle length of 1.2 m (Nigmatullin et al., 2001). It is known only from the Eastern Pacific.
Watch a video of D. gigas off California

Hatchlings are 1.1 mm ML and lack photophores. Life span is about one year based on the assumption that statolith increments are daily and this is supported by cohort analysis using length-frequency distributions although the largest specimens may exceed a year. A 770 mm ML male had 352 increments and a 860 mm ML female had 338 increments. Paralarvae and juveniles grow 5-8% in ML per day reaching 100-110 mm ML in 45-55 days. (Nigmatullin et al., 2001). Off Peru, Argüelles et al (2001), using statolith increments found the maximum age found was 354 days for a 855 mm ML male and 344 days for a 965 mm female.

Eastern Pacific Ocean from 26°S to mid-Baja, California with occasional north and south expansions. Presently from about 60°N to 47°S. 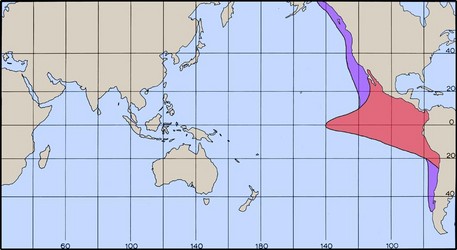 Figure. Distribution map of D. gigas. Red - Common historical distribution. Purple - Recent expansion. Red , purple is the total present distribution. Expansion to the south appears to have been more frequent in the past than to the north. Historical data mostly from Wormuth (1976).

Page: Tree of Life Dosidicus Steenstrup 1857. Dosidicus gigas (Orbigny 1835). Jumbo squid. Authored by Richard E. Young and Michael Vecchione. The TEXT of this page is licensed under the Creative Commons Attribution-NonCommercial License - Version 3.0. Note that images and other media featured on this page are each governed by their own license, and they may or may not be available for reuse. Click on an image or a media link to access the media data window, which provides the relevant licensing information. For the general terms and conditions of ToL material reuse and redistribution, please see the Tree of Life Copyright Policies.