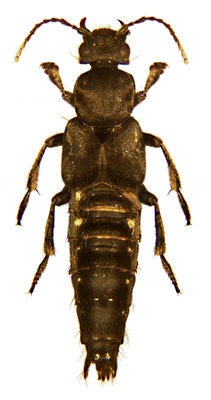 Sharp (1876) described the first known species of Elmas, E. modesta from Nicaragua, in his new genus Selma Sharp. Later, Bernhauer (1915) described E. strigella from Brazil, also in Selma. Blackwelder (1952) recognized that Selma Sharp 1876 was a junior homonym of Selma Adams 1863, and he proposed the replacement name Elmas Blackwelder 1952. The remainder of the known species of Elmas was described by Ashe and Chatzimanolis (2003). Species of Elmas are Neotropical; they are distributed from Nicaragua to Bolivia, from 20 to 700 meters in wet tropical lowland forests (most specimens from 200 meters or below), except in Bolivia where they have been collected in Yungas forests at 1000 and 1450 meters.

These large black staphylinids are among the most distinctive among the subtribe Xanthopygina. Species of Elmas are medium to large, 11-23 mm in total length, with body uniformly black; body luster in most dull due to very fine and dense punctuation, though a few species have the integument shining between more distant punctures. They may be recognized by the combination of:

The phylogeny above is the strict consensus tree. The lineages of Elmas species are only weakly resolved by the available dataset (Ashe and Chatzimanolis 2003). Few well-supported conclusions can be drawn. Elmas is strongly supported to be a monophyletic lineage, and E. strigella is probably the most basal known species. Elmas spinosus + E. falini + E. gigas are strongly supported to be a monophyletic group; among known species they are unique in having a strong spine medially on the submentum and a longitudinally depressed area between the antennae. Elmas hibbsi is more weakly supported to be the sister group to these three species. The E. windsori – E. patillas lineage, consisting of 2 Panamanian and 2 Costa Rican species, is found in all trees, but is not strongly supported. It is interesting that within this lineage, the Panamanian and Costa Rican species are sister species in all reconstructions (E. windsori + E. costaricensis and E. panamaensis + E. patillas).

Ashe, J. S. and S. Chatzimanolis. 2003. A revision of the genus Elmas Blackwelder, 1952 (Coleoptera: Staphylinidae: Staphylininae: Xanthopygina), with a preliminary reconstructed phylogeny of the species. Scientific Papers of the Natural History Museum of the University of Kansas. 28: 1-41.

Sharp, D. 1876. Description of a new genus and some new species of Staphylinidae from Mexico and Central America. Transactions of the Entomological Society of London. 1876: 425-432.

Development of this page made possible by National Science Foundation PEET grants DEB 95-21755 and DEB 99-78110 to James S. Ashe.