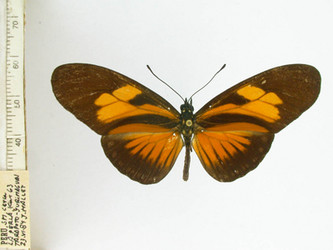 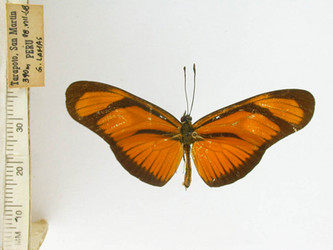 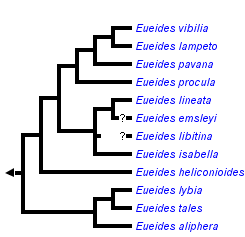 Early stages: The larvae are similar to Heliconius, except that they are more colourful and feed only on mature leaves.  The larvae are solitary in some species, gregarious in others, and seem to show indications of larval mimicry in some species  (i.e., Eueides vibilia vialis in Costa Rica). The pupae are highly distinctive, with four dorsal spines that are usually spread out into a X shape, and a strong curve to the abdomen that causes suspended pupae to be held horizontally to the substrate (DeVries, 1997) (see each species for more details).

Adults:  The butterflies in this genus are similar to Heliconius but are recognized by the smaller size, a relatively short body, and short antennae (see each species for more details). The colour patterns show mimetic resemblance to tiger-striped species, Heliconius and Actinote, and others seem to form mimicry complexes with Dryas and other Eueides species (DeVries, 1997).

The genus ranges from Mexico through Central and South America and the West Indies, and most are found in the Amazon  Basin (DeVries, 1997) (see maps attached to each species).

Eueides species are mostly canopy-flying insects and tend to live in localized populations near the hostplant.

Correspondence regarding this page should be directed to Margarita Beltr?n at , Chris Jiggins at , and Andrew V. Z. Brower at

Page: Tree of Life Eueides Huebner 1816. Authored by Margarita Beltr?n, Chris Jiggins, and Andrew V. Z. Brower. The TEXT of this page is licensed under the Creative Commons Attribution-NonCommercial-ShareAlike License - Version 3.0. Note that images and other media featured on this page are each governed by their own license, and they may or may not be available for reuse. Click on an image or a media link to access the media data window, which provides the relevant licensing information. For the general terms and conditions of ToL material reuse and redistribution, please see the Tree of Life Copyright Policies.