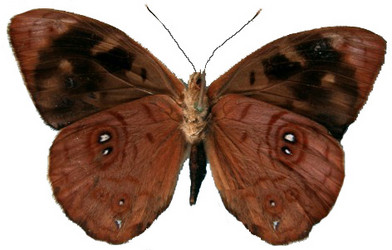 close box
Phylogenetic hypothesis of species in Eunica from Jenkins (1990)

The genus Eunica was extensively revised by Jenkins (1990), who also included a cladistic analysis of 55 morphological characters. Species of Eunica are found mainly in South America with a few species found in Central America and the Greater Antilles. The genus comprises 40 currently accepted species (Lamas 2004). The host plants have been recorded for only a few species, but in line with other species in Biblidinae, these are in the plant families Euphorbiaceae and Burseraceae.

According to Jenkins (1990) the diagnostic features of Eunica are:

The phylogenetic hypothesis for Eunica is based solely on morphological characters at the moment. The tree has a consistency index of 0.40, meaning that many of the characters are homoplasious. Clearly more data (both morphological and molecular) are needed to corroborate the relationships shown. The study by Jenkins (1990) did have several well-supported results. First, he showed that the species Eunica cuvierii (previously placed in the monotypic genus Libythina) belongs in Eunica. Several of the clades in the tree above are supported by unique synapomorphies.

Correspondence regarding this page should be directed to Andrew V. Z. Brower at and Niklas Wahlberg at