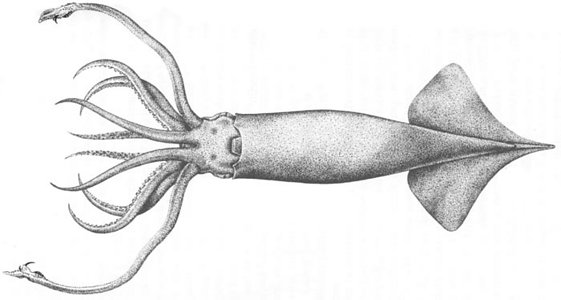 The above description, except for photographs, is from Kristensen (1981). More details of the description can be found here.

The mature egg, found in the vicinity of the ovary of a mature female, is nearly spherical and almost 5 mm in the longest axis (Kristensen, 1981). Egg masses have never been observed in nature.

Paralarvae of G. fabricii are most easily separated from the partially sympatric species, G. steenstrupi, by the two large photophores on the ventral surface of the head that distinguish the adults as well.  The full chromatophore pattern of the paralarva is not known. The number of suckers on arms I-IV is useful at sizes greater than 13 mm ML as is the form of the funnel organ in all but smallest paralarvae. The paralarval stage appears to end at about 20 mm ML which corresponds with hook development and movement into deeper water (Falcon, et al., 2000).


Figure. Ventral views of growth stages of G. fabricii showing the head chromatophores and the form of the funnel organ. Drawings from Falcon, et al. (2000).