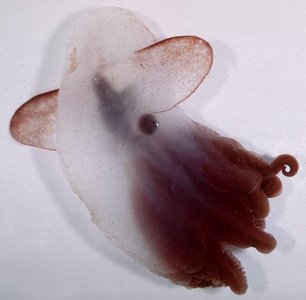 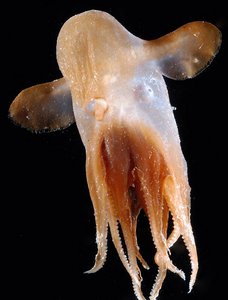 The following 14 nominal species are included in the genus. 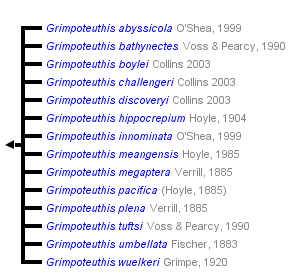 Most species of Grimpoteuthis are poorly known. They are somewhat less compressed in the anterior-posterior axis than are members of Opisthoteuthis and they generally have relatively larger fins. Species are closely associated with the deep-ocean floor and some species, at least, alternate between sitting on the ocean bottom and swimming above it while some others apear to be completely pelagic.

The male reproductive tract shows considerable variation between species and is frequently described for new species. However the amount of variation within a species is unknown and therefore the specific value of the structures of the tract is uncertain. In addition there is some confusion regarding the identification of the various parts. Ebersbach (1915) made a careful dissection of the digestive tract of a Grimpoteuthis that he believed was G. umbellata. His illustration, relabeled, is shown on the right. The proximal glands on the sperm duct are often called "seminal vesicles." However, as Ebersbach pointed out, they are spermatophore-forming glands and should be called "spermatophore glands." A small gland (labeled "?") lies between the spermatophore and accessory glands that Ebersbach called the accessory spermatophore gland but may be Needham's sac. 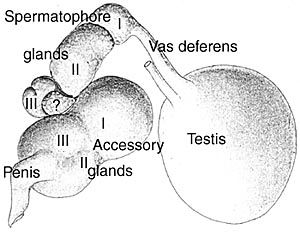 Robson (1932) erected the genus Grimpoteuthis to include some species formely placed in Cirroteuthis. He designated G. umbellata (Fischer, 1883) as the type species.

Very little is known about the habits and behavior of species of Grimpoteuthis. These photographs taken off Hawaii show an unknown species of Grimpoteuthis sitting on the ocean floor (right) and swimming with its fins just above the ocean floor (left). Some species, perhaps that in the title photograph, are very delicate and unlike the species seen on the right, may be entire benthopelagic.

Species appear to be associated with the deep ocean floor in all oceans of the world.

Species of Grimpoteuthis, as with many other species of cirrates undergo great shrinkage with fixation and preservation. The cirrate on the left, identified as G. wuelkeri by Uwe Piatkowski, was photographed directly after its capture. The photograph of the same specimen, on the right, was taken after two years in ethanol. While the relative sizes of the two have not been maintained here, note that the eyes and fins appear relatively larger after preservation.

Figure. G. wuelkeri before and after preservation. Photographs provided by U. Piatkowski.

Collins, M. A. In press. The genus Grimpoteuthis (Octopoda: Grimpoteuthidae) in the North-east Atlantic, with descriptions of three new species.

Page: Tree of Life Grimpoteuthis Robson 1932. Authored by Richard E. Young and Michael Vecchione. The TEXT of this page is licensed under the Creative Commons Attribution-NonCommercial License - Version 3.0. Note that images and other media featured on this page are each governed by their own license, and they may or may not be available for reuse. Click on an image or a media link to access the media data window, which provides the relevant licensing information. For the general terms and conditions of ToL material reuse and redistribution, please see the Tree of Life Copyright Policies.