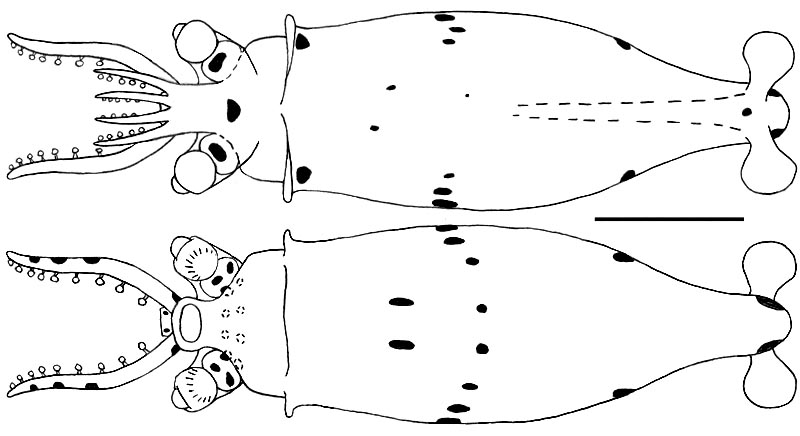 With increased age and depth of occurrence, Helicocranchia, becomes reddish in color probably as they start to mature sexually. Near sexual maturity many cranchiids apparently lose their tentacles. The insitu ROV images on the right below show that loss of tentacles is, indeed, normal. 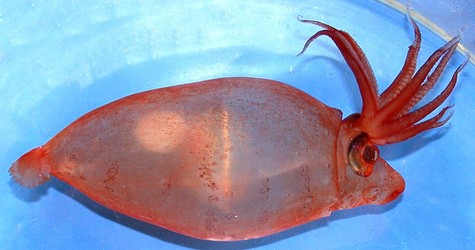 Figure. Left - Side view of H. pfefferi, central North Atlantic, 63 mm ML. Note the color and the absence of tentacles. Photographed aboard the MarEco cruise of the R/V G.O. SARS by R. Young. Right - Insitu photographs of the same individual of Helicocranchia sp, anterolateral views, from an ROV photographed floating in front of oil pumping equipment in the Gulf of Guinea at a depth of 1015 m (SERPENT project). Arrow in upper photograph points to stub of tentacle.

The distribution of Helicocranchia pfefferi from Hawaiian waters shows a clear pattern of ontogenetic descent with squid occurring in progressively deeper water as they get larger. Diel vertical migration does not seem to occur in this species. The dominance of nighttime captures for young stages is a result of the low sampling effort in shallow depths during the daytime and doesn't indicate the daytime absence of small squid at these depths. 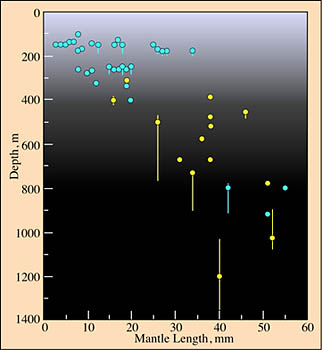 Other Names for Helicocranchia Massy, 1907

Page: Tree of Life Helicocranchia Massy, 1907. Piglet squid. Authored by Richard E. Young and Katharina M. Mangold (1922-2003). The TEXT of this page is licensed under the Creative Commons Attribution-NonCommercial License - Version 3.0. Note that images and other media featured on this page are each governed by their own license, and they may or may not be available for reuse. Click on an image or a media link to access the media data window, which provides the relevant licensing information. For the general terms and conditions of ToL material reuse and redistribution, please see the Tree of Life Copyright Policies.