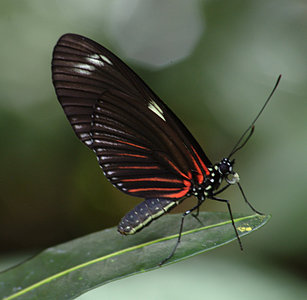 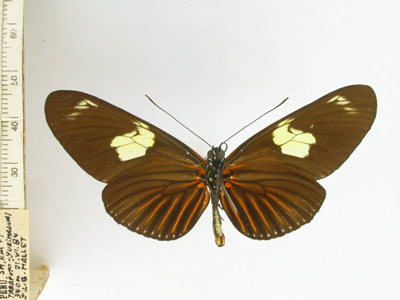 Heliconius doris populations are polymorphic in parts of the species distribution, with blue, red or green coloration at the base of the dorsal hindwing. 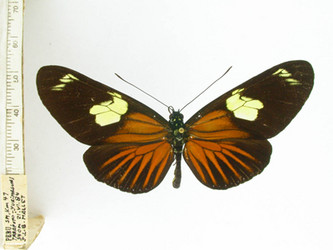 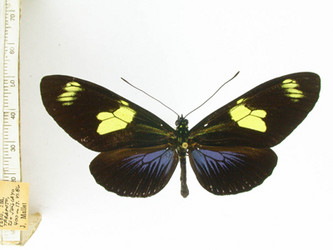 Etymology: DORIS was the Okeanid nymph wife of the sea-god Nereus, and the mother of the fifty Nereides. She may have been the goddess of the rich fishing-grounds found at the mouths of rivers where fresh water mingled with the brine. The Okeanides were sisters of the Rivers. Her name is connected with two words–dôron, "gift" or "bounty," and zôros, "pure" and "unmixed." Zôros was often used to describe fresh water and from it were derived words such as zôrua "a pipe for running water" and zôrux "a canal or water conduit" (Doris).

Early stages:  Eggs are yellow and approximately 1.1 x 0.8 mm (h x w). Females gather together and usually each one places eggs to a total of 50 to 1000 in leaves of the host plant. Mature larvae have a yellow body with black bands and black scoli and head; length is approximately 0.1 cm. Caterpillars are gregarious (Brown, 1981).

Heliconius doris is distributed from Central America to the Amazon. This map shows an approximate representation of the geographic distribution of this species. The original data used to draw these maps are derived from Brown (1979) which is available at  Keith S. Brown Jr. (1979). Ecological Geography and Evolution in Neotropical Forests 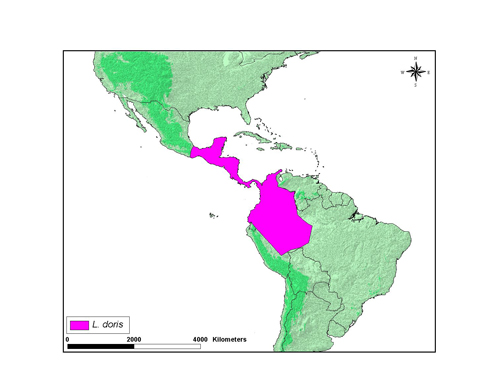 Distribution of Heliconius doris (=Laparus doris). The range extends eastward beyond the pink area of the map, including Trinidad and the Guianas. © 2002 Margarita Beltran.

There are four named geographical races of H. doris (as well as numerous synonyms associated with the polymorphic populations):

H. doris occurs from sea level to 1,800 m in forest clearings.  Usually individuals fly rapidly and in the middlestory.

Larval hostplant: the gregarious larvae feed primarily on plants from the subgenus Granadilla, from the Quadrangulares, Digitales, and Laurifoliae sections (Passifloreaceae) (Brown, 1981)

Other Names for Heliconius doris (Linnaeus 1771)

Correspondence regarding this page should be directed to Margarita Beltr?n at and Andrew V. Z. Brower at

Page: Tree of Life Heliconius doris (Linnaeus 1771). Authored by Margarita Beltr?n and Andrew V. Z. Brower. The TEXT of this page is licensed under the Creative Commons Attribution-NonCommercial-ShareAlike License - Version 3.0. Note that images and other media featured on this page are each governed by their own license, and they may or may not be available for reuse. Click on an image or a media link to access the media data window, which provides the relevant licensing information. For the general terms and conditions of ToL material reuse and redistribution, please see the Tree of Life Copyright Policies.