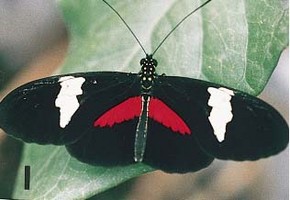 This species is a close relative of Heliconius erato that is found in the dry forests of south west Ecuador and north west Peru, and into the Maranon valley on the eastern slopes of the Andes.  It is quite abundant and very distinctive, being non-mimetic and therefore unlike other sympatric species.  It has been extensively studied as a model for understanding speciation.  It hybridises with Heliconius erato cyrbia in a narrow zone in south west Ecuador where hybrids form about 10% of overlapping populations.

Jiggins CD, McMillan WO. 1997. The genetic basis of an adaptive radiation; mimicry in two Heliconius sibling species. Proceedings of the Royal Society of London, B 264: 1167-75

Jiggins CD, McMillan WO, Neukirchen W, Mallet J. 1996. What can hybrid zones tell us about speciation? The case of Heliconius erato and H. himera (Lepidoptera: Nymphalidae). Biological Journal of the Linnean Society 59: 221-42