Heliconius melpomene is a widespread species well known for its geographic diversity in colour pattern.  Across most of its range, H. melpomene is co-mimetic with Heliconius erato, and both species have around 30 named geographic sub-species. H. melpomene is generally less abundant than H. erato, but both are found in open areas.  H. melpomene can however be locally common in river edges and along streams.

H. melpomene is an ecological host plant specialist in Central America, where it only feeds on either Passiflora oerstedii or Passiflora menispermifolia.  In other parts of the range however it is more of a generalist and can be found feeding on several different Passiflora species.   Even in Central America, the larvae will happily develop on most species of Passiflora, so the specialisation is due to the host preferences of the females (Smiley, 1978).

The genetic basis of the geographic variation in colour pattern has been extensively worked out over many years of crossing experiments (Sheppard et al., 1984).  Just a few genes of major effect control most of the changes.  These loci have recently been shown to be shared across several different Heliconius species (Joron et al., 2006). 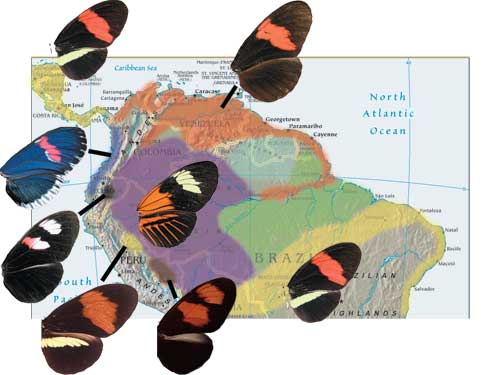