This close relative of Heliconius cydno is endemic to the Pacific slope of Costa Rica and western Panama. It is involved in Müllerian mimicry with H. hewitsonii.

Adult H. pachinus can be distinguished from mimetic H. hewitsonii by the proximal yellow forewing band. In H. pachinus, this band is entirely beyond the end of the discal cell, while in H. hewitsonii, the yellow band cuts through the distal end of the discal cell. H. pachinus lacks the brown "forceps" marking on the underside of the hindwing that occurs in H. cydno forms, and instead exhibits rather extensive red basal streaks, another feature it shares in common with its mimic H. hewistonii. 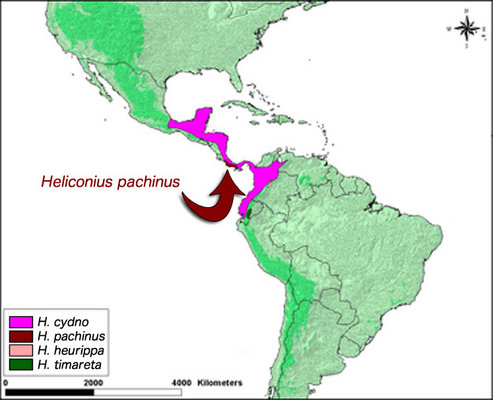 Correspondence regarding this page should be directed to Margarita Beltran at and Andrew V. Z. Brower at