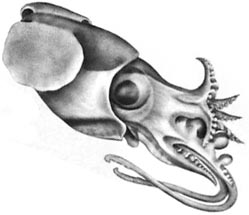 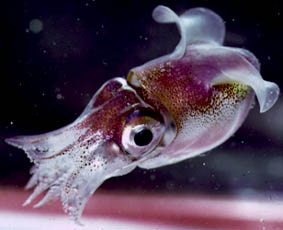 Species of Heteroteuthis are the most oceanic members of the subfamily. They are capable of producing brilliant luminescence from their bacterial photophore or secreting luminescent clouds, in a variety of forms, from it. Their large visceral photophore is seen in the left photograph below with the mantle cut open; a closer view is seen to the immediate right. The two large pores on the photophore surface enable the luminescent material to be extruded from the underlying glands. The heavy covering of iridophores that provide the variety of colors seen in the photographs appear to act as a color filter and shutter for the bioluminescence. Other members of the subfamily presumably have similar luminescent capabilities but they have not been observed. 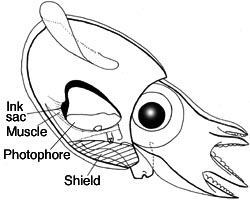 Figure. Left - Ventral view of H. hawaiiensis with the ventral mantle removed, female, Hawaiian waters. Middle - Close-up view of the same photophore. Left - See-through side view of H. hawaiiensis showing relationship between the ink sac, which surrounds the back of the photophore, the photophore and the ventral mantle shield which may act as a diffuser of the bioluminescence. Photographs by R. Young; drawing modified from Young (1977).

Three named species are presently recognized in the genus, H. dispar (type species, type locality - Mediterranean Sea), H. hawaiiensis (type locality - off the Hawaiian Islands), and H. dagamensis (type locality- off South Africa). H. dispar and H. hawaiiensis are very similar but specimens have never been directly compared. As a result, reliable characters to separate them are unknown. An unnamed species, Heteroteuthis sp. A, is very different from the other species but is known only from a female. 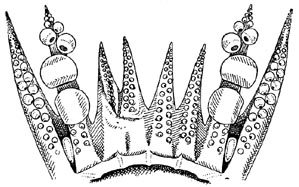 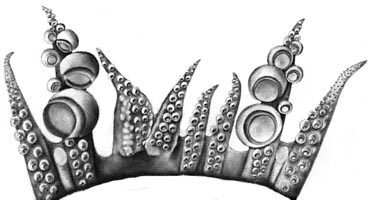 Figure. Left - Oral view of the arm crown of H. dispar, Mediterranean Sea, male. The third arms each bear two greatly enlarged suckers which are aligned in the drawing but actually one member is in the dorsal series and the other in the ventral series. Drawing from Naef (1921-23). Right - Oral view of the arms of a mature male Heteroteuthis dagamensis. Note that the greatly enlarged suckers are in the dorsal series and clearly alternate with smaller suckers in the ventral series. Drawing by A. Hart. 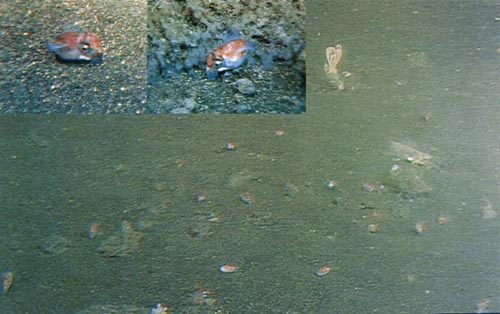 Page: Tree of Life Heteroteuthis Gray, 1849. Authored by Richard E. Young, Clyde F. E. Roper, and Katharina M. Mangold (1922-2003). The TEXT of this page is licensed under the Creative Commons Attribution-NonCommercial License - Version 3.0. Note that images and other media featured on this page are each governed by their own license, and they may or may not be available for reuse. Click on an image or a media link to access the media data window, which provides the relevant licensing information. For the general terms and conditions of ToL material reuse and redistribution, please see the Tree of Life Copyright Policies.