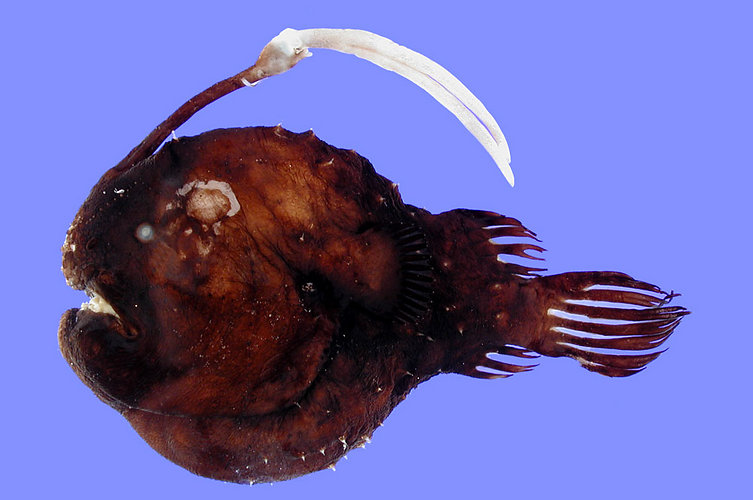 Himantolophids are among the most easily recognized taxa of the suborder: with their globose spiny bodies, short, stout illicia, elaborately decorated escae, and protruding chins covered with numerous wart-like swellings, they can hardly be confused with anything else. One genus, five species groups, and 18 species are currently recognized. Specimens often attain lengths over 40 cm standard length.

Metamorphosed females and males of the family Himantolophidae are distinguished from those of all other ceratioid families by lacking parietal bones throughout life (lost during metamorphosis in females of the gigantactinid genus Rhynchactis; see Bertelsen et al., 1981:10, fig. 13) and in having a broad toothless vomer, and triradiate pelvic bones (triradiate pelvics are also found in some specimens of the oneirodid genus Chaenophryne; see Pietsch, 1975:79, fig. 2).

Metamorphosed males are further differentiated by having a series of enlarged dermal spines above and posterior to the upper denticular bone. They differ further in having the following combination of character states: eyes lateral and slightly oval in shape, with narrow aphakic space in front of lens; olfactory organs large, nostrils directed laterally; 16-31 denticular teeth on snout, 20-50 on chin, fused at base to form upper and lower denticular bones, respectively; fin-ray counts as given for metamorphosed females; skin densely covered with close-set dermal spinules; free-living, never parasitic, but temporarily attached males unknown (see Pietsch, 2005).

Recently metamorphosed females, 30 to about 34 mm SL, differing from larger specimens in having a shorter illicium and shorter escal appendages, in lacking dermal spines and papillae on snout and chin, and in having fewer jaw teeth.

Color in preservation black to dark brown over entire surface of head and body; females of some species with whitish or lightly pigmented areas on chin, snout, and upper surface of head or body and/or with one or more shiny white patches on ventral and/or dorsal midline, at or on bases of one or more of median fins; pigmentation of illicium and fin rays increasing with size of specimens and highly variable among species.

The largest known female specimen, the holotype of H. groenlandicus from southwest Greenland, measured about 465 mm SL, and there are several additional individuals in the range of 250-400 mm SL (Bertelsen and Krefft, 1988:14, 37). The known metamorphosed males measure between 23-39 mm SL, and the largest larvae range from 17-22.5 mm SL.

Like most ceratioid families, the Himantolophidae is widely distributed in all three major oceans of the world, with most records, including all larvae and males, confined to a broad belt limited by about 40°N and 40°S. However, large females, probably expatriates and so far all of a single species, H. groenlandicus, have been taken as far north as 65° or at the polar front in the North Atlantic.

The H. appelii-group, containing only H. appelii, appears to be restricted to the southern subtropical convergence, between approximately 27° and 43°S in all three major oceans. Likewise, each of the other species groups has a wide, probably circumglobal distribution, but besides H. appelii only two species have been recorded from more than one ocean (H. cornifer from the Atlantic and Pacific and H. macroceratoides from the Atlantic and Indian oceans). Nine species have so far been recorded only from the Atlantic Ocean. Identifiable specimens from the Indian Ocean are few: only H. appelii and H. macroceratoides mentioned above and the single known specimen of H. pseudalbinares caught slightly east of Cape Town. However, several larvae, a male, and some juvenile females caught in this ocean can be referred to the H. groenlandicus-group, and may belong to H. groenlandicus the most numerous and widely distributed Atlantic member of this group. Nine of the 12 species known from the Atlantic have been recorded from the northwestern part of this ocean and are, with the exception of H. appelii, restricted to northern waters; the remaining three species are known from too few specimens to predict their geographic range.

Key to Females of Species Groups of the Genus Himantolophus

3A. Proximal half of distal escal appendage simple, undivided; base of escal bulb without appendages; a distal pair of appendages on illicial stem situated 1.5 to 2 times diameter of esca bulb below base of posterior escal appendage (Himantolophus nigricornis-group Bertelsen and Krefft, 1988)

4A. Posterior escal appendage bifurcated at base, each primary branch with an anterior series of 2-7 side-branches; distal swellings of escal bulb not distinctly divided into four lobes (Himantolophus appelii-group Bertelsen and Krefft, 1988)

4B. Posterior escal appendage with (1) proximal part undivided and distal part simple or bifurcated, or (2) divided near base to form three simple filaments, or (3) represented by two or three separate undivided filaments; base of distal escal appendage surrounded by four well-developed escal lobes (Himantolophus groenlandicus-group Bertelsen and Krefft, 1988)

T. W. 1972. A second specimen of the deep-sea anglerfish, Phyllorhinichthys micractis (family Oneirodidae), with a histological description of the snout flaps. Copeia, 1972(2): 335–340.

Pietsch, T. W. 1974a. Osteology and relationships of ceratioid anglerfishes of the family Oneirodidae, with a review of the genus Oneirodes Lütken. Nat. Hist. Mus. L. A. Co., Sci. Bull., 18, 113 pp.