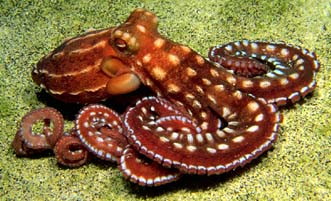 Incirrate octopods are about 85% of all octopodan species. They are very small to large in size. The members of the Octopodidae, the family with the most species and individuals, are benthic. The other seven incirrate families have pelagic species. The benthic incirrate octopods live from the intertidal zone to at least 4000 m, and bathypelagic forms may be found down to 2000 m. The octopodids exhibit sophisticated behavior. The brain of benthic octopuses, especially that of Octopus vulgaris, has become a model for relating brain structure to function (e.g., J. Z. Young, 1971). Incirrate octopods are commercially fished throughout the world.

Fins are absent and the arms bear one or two rows of suckers and lack cirri. The shape of the body is saccular and rather broad. The arms are often of about equal length, but sometimes the dorsal or lateral or ventral arms are distinctly longer than the others.

Idioctopus gracilipes described by Taki (1962, 1964) and placed in its own family is probably a synonym of Amphitretus pelagicus (see Hochberg, et al, 1992).

Voight (1997) attempted to unravel the relationships among incirrate genera using cladistic methods based on morphology. Her family-level phylogeny is as follows:


Thore (1949) considered the Amphitretidae and Vitreledonellidae to be closely related due to the shared position of the stomach and caecum relative to the digestive gland. Young et al. (1999) caution that the unusual position of the stomach and caecum serves to reduce the silhouette in upper mesopelagic waters and that the similarity could be convergent. In addition, the very different structure of their radulas has complicated the understanding of their relationships. Nevertheless, in a first look at relationships via a cladistic analysis based on morphology, Voight (1997) found these families grouping together, and placed the Vitreledonellidae in the synonomy of the Amphitretidae. This study, however, requires confirmation.

Molecular data from the mitochondrial Cytochrome Oxidase I gene and the nuclear Actin II gene, while without strong bootstrap support, suggest that our present classification of the Incirrata may be in error (Carlini, 1998; Carlini and Graves, 1999). Indeed, the possibility exists that all incirrate families are derived from the Octopodidae.

Where known, incirrate octopods have a life span of 6 months to 4 years; one year is typical. Those living to 4 years are large and/or cold water species. Most species appear to be terminal spawners, i. e. they lay all eggs toward the end of their life-span and die shortly after the last of the brooded embryos hatch. Some species, however, lay several egg batches and feed between spawning periods. Spawning in the epipelagic incirrates is in this latter mode but egg batches overlap (i.e. a second batch is deposited before the first one hatches).

All incirrate octopods, benthic and pelagic, brood their eggs until the young hatch. Egg strings are mostly fixed to a substrate although some species carry their eggs on the arms. Specialized brooding habits are present in pelagic incirrates. In Argonauta the dorsal arms secrete a "shell" that functions as a brood chamber and in Tremoctopus and the bolitaenids the arms form brood-chambers. In Ocythoe, the eggs develop in the oviducts and in Vitreledonella, apparently, in the mantle cavity.

Page: Tree of Life Incirrata Grimpe, 1916. Common octopods, octopuses or devilfishes. Authored by Katharina M. Mangold (1922-2003) and Richard E. Young. The TEXT of this page is licensed under the Creative Commons Attribution-NonCommercial License - Version 3.0. Note that images and other media featured on this page are each governed by their own license, and they may or may not be available for reuse. Click on an image or a media link to access the media data window, which provides the relevant licensing information. For the general terms and conditions of ToL material reuse and redistribution, please see the Tree of Life Copyright Policies.