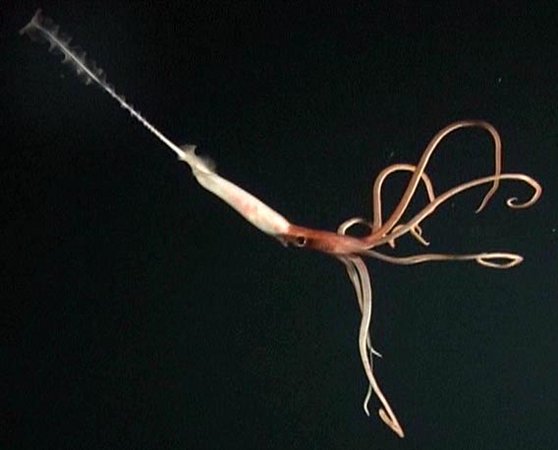 The presence of the membranous ornamentation on the slender tail wasn't known until recent observations (2003) of the squid from a submersible (see below). Therefore, the older drawings reproduced here and on the accompanying description page show a smooth tail.

Recent observations and video recordings of J. portieri by Frank Parrish (NMFS) from a research submersible at a depth of about 1100 m have provided the only direct evidence of the behavior of this squid (see video frames below). Except for the constant beating of the tail fin, the squid's movements appeared to be in extreme slow-motion. The video indicates that the squid extends its tentacles in a manner similar to that seen in species of Mastigoteuthis and Chiroteuthis. In these squids the large tentacle-sheaths (= lateral membranes of arms IV) on the long arms IV cradle the tentacles so that the extending tentacles seem to emerge from the tips of arms IV. With arms IV spread apart laterally, the long, delicate tentacles are less likely to entangle one another. In spite of the fact that Joubiniteuthis has very short arms IV it appears to use the same tentacle-deployment strategy. 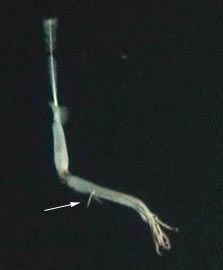 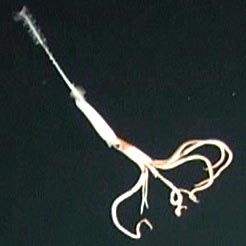 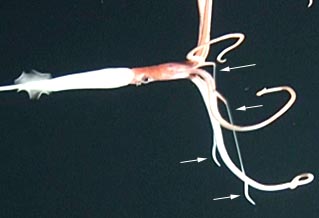 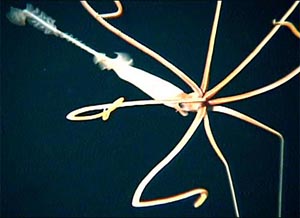 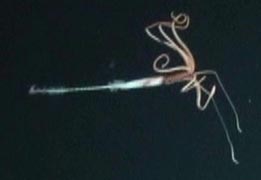 There are few unambiguous records of the depth of capture of this species. Young (1978) reported a nighttime capture (64 mm ML) in an opening-closing net at 480-550 m depth and a nighttime capture (42 mm ML) in an oblique tow that fished to 425 m. A number of captures have been made during the day or night in open tows that fished from 800 to 2500 m but the squid could have been caught during setting or retreival of the net. The submersible record, therefore, is especially valuable as it confirms the presence of the squid in deep water (about 1100 m) during the day.

Although the records are scattered, this squid appears to occupy tropical and subtropical latitudes in the Atlantic (Young and Roper, 1969) and has been recorded off Japan (35°N, 138.5°E from the stomach of a stranded Alepisaurus ferox) and Hawaiian waters.