This genus has a single species.
Containing group: Lycoteuthidae

L. megaleia is a small, colorful squid that differs from other lycoteuthids, among other characters, in the presence of a hectocotylus and a rostrum on the gladius. 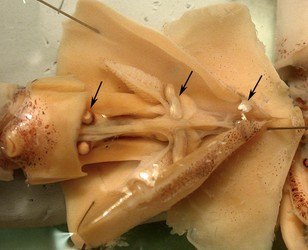 Drawings of the tentacular club and the club and arm suckers can be found here.

The violet pigment overlying the photophores presumably acts as a color filter to allow the bioluminescence to more closely match the color of the downwelling sun or moonlight. The same type of "detached" filter appears to be present in the photophores of species of Lycoteuthis.

Advanced paralarvae (Young, 1964) are similar to subadults except for some differences in body proportions, size of photophores and the absence of all but the large basal photophore on the tentacle. Note presence of this photophore at the base of the tentacle in the drawing (arrow).

Figure. Ventral view of an 8 mm paralarva. Drawing from Young, 1964.

Drawings printed with the Permission of the Bulletin of Marine Science.

Page: Tree of Life Lampadioteuthis Berry 1916. Lampadioteuthis megaleia Berry, 1916. Authored by Richard E. Young and Michael Vecchione. The TEXT of this page is licensed under the Creative Commons Attribution-NonCommercial License - Version 3.0. Note that images and other media featured on this page are each governed by their own license, and they may or may not be available for reuse. Click on an image or a media link to access the media data window, which provides the relevant licensing information. For the general terms and conditions of ToL material reuse and redistribution, please see the Tree of Life Copyright Policies.