Species of Leachia are easily recognized by the straight cartilagenous, tubercular strip on the mantle that arises from each point of funnel-mantle fusion, the slender, tapering mantle and the terminal fins with a combined oval shape. 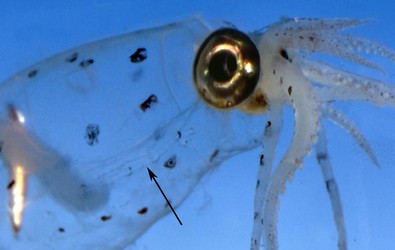 Figure. Ventrolateral view of the antrior region of Leachia dislocata showing a transparent, cartilagenous strip bearing tubercules (arrow). Tubercules can be difficult to see because of their transparency. Photograph by R. Seapy.

Leachia species, however, are not easily recognized. Many names exist in the literature and most have poor descriptions associated with them and are based on paralarvae. At present, geographical location is one of the most important characteristics used in identification. The type localities of the named species are: 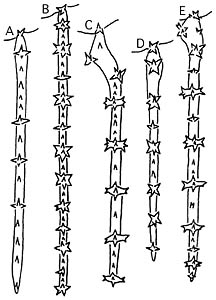 The paralarvae of the genus (below, left) have a very distinctive appearance. A paralarva has a very long, slender brachial pillar and a pointed tip to the gladius. Paralarvae of Leachia were originally placed in the genus Pyrgopsis and are now often referred to as pyrgopsis paralarvae. The maturing adult (below, right) may, depending on the species, may retain partially stalked eyes as in L. atlantica. 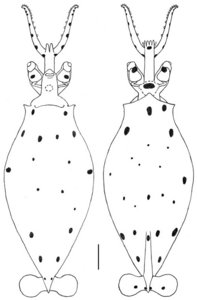 Figure. Left - Dorsal and ventral views of paralarval L. pacifica, 7.9 mm ML, Hawaiian waters. Drawing by R. Young. Right - Posterodorsal and dorsolateral views of the same maturing L. atlantica.  The approach to maturity is indicated by the darkly pigmented, terminal arm III photophores and the heavy skin pigmentation. Note that in the second image that a row of mantle tubercules can be seen. Photographs from an ROV video operated from the R/V OKEANOS EXPLORER and taken at a depth of about 1700 in the northern Gulf of Mexico; provided by NOAA's Ocean Exploration program.

Page: Tree of Life Leachia Lesueur 1821. Authored by Richard E. Young, Katharina M. Mangold (1922-2003), and Michael Vecchione. The TEXT of this page is licensed under the Creative Commons Attribution-NonCommercial License - Version 3.0. Note that images and other media featured on this page are each governed by their own license, and they may or may not be available for reuse. Click on an image or a media link to access the media data window, which provides the relevant licensing information. For the general terms and conditions of ToL material reuse and redistribution, please see the Tree of Life Copyright Policies.