L. grimaldii is a large squid (100 cm ML) whose tentacles fail to grow much beyond the paralarval stage and are lost in subadults. It has a mantle mostly covered with overlapping dermal cushions (= "scales"). This squid is rarely captured and little is known of its biology.

A member of the lepidoteuthid families ...

The paralarva was first described as Enoptroteuthis spinicauda Berry, 1920 but its familial relationships were obscure. Subsequently various authors placed it alternately in three different families. Over 70 years after its original capture, it was identified as belonging to none of these families, but as a young L. grimaldii (Young, 1991).

A list of all nominal genera and species in the Lepidoteuthidae can be found here. The list includes the current status and type species of all genera, and the current status, type repository and type locality of all species and all pertinent references.

The paralarva reaches a rather large size (at least 10 mm ML). Large, thick tentacles are present in the paralarva and they have small, compact clubs. The clubs carry only a few suckers, in two series, with some very large and some very small. During the early subadult stage, the tentacles are lost. The adults therefore rely solely on their eight arms for capturing prey. Young et al. (1998) suggest that the ancestor of Lepidoteuthis may have had highly specialized, elongate tentacles, as are found in some chiroteuthidids today. When evolutionary pressures changed, the tentacles were too specialized to change quickly and, instead, were lost. 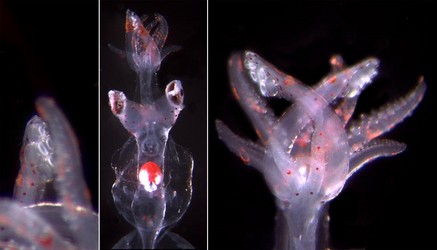 Figure. Left - Ventral views of tentacular club, brachial crown and paralarva of L. grimaldii, 10 mm ML, off Hawaii. The digestive gland is bright red and spindle-shaped, although it appears round in ventral view, and is located well posterior to the cephalic cartilage. Photographs from Young, et al. (1998). Right - Ventral view of a paralarva of L. grimaldii and an oral view of its tentacular club, 9.7 mm ML. Note the terminal position of the fins. Drawing from Young, 1991.

An intact adult was first described by Clarke and Maul (1962). No remnant of the tentacles remain in the adult.

This species is known from the tropical and subtropical of the regions of the Atlantic, Pacific and Indian Oceans (Nesis, 1982/87).

Page: Tree of Life Lepidoteuthidae Pfeffer 1912. Lepidoteuthis grimaldii Joubin, 1895. The scaled squid. Authored by Richard E. Young and Michael Vecchione. The TEXT of this page is licensed under the Creative Commons Attribution-NonCommercial License - Version 3.0. Note that images and other media featured on this page are each governed by their own license, and they may or may not be available for reuse. Click on an image or a media link to access the media data window, which provides the relevant licensing information. For the general terms and conditions of ToL material reuse and redistribution, please see the Tree of Life Copyright Policies.