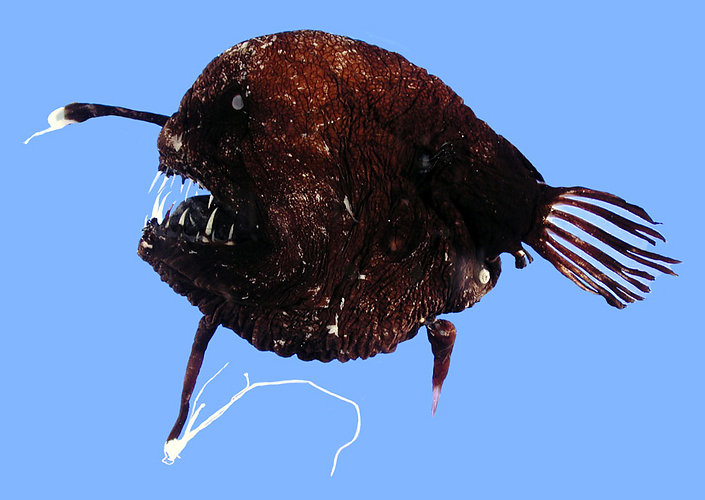 Linophrynids are spectacular even among the most bizarre of their anglerfish relatives in having the largest mouths, with the longest dagger-like teeth of any fish and perhaps of any vertebrate. In addition to an elaborately adorned esca that harbors symbiotic bioluminescent bacteria, most are uniquely equipped with a complex bioluminescent chin barbel. These features, coupled with low dorsal and anal fin-ray counts, easily differentiate female linophrynids from those of all other Lophiiformes. The family consists of five genera, three of which contain only a single recognized species, while the fourth, Acentrophryne, contains two species, and the fifth, Linophryne, includes 22 species divided among three subgenera (Bertelsen, 1982:90-100).

Larvae of the Linophrynidae are further differentiated by having the following combination of characters states: body slender, more-or-less elongate; skin very inflated; pigment on body absent or distributed along lateral margins, never on dorsal part of body; pectoral fins small, not reaching beyond dorsal and anal fins; pelvic fins absent; fin-ray counts as given for metamorphosed females; sexual dimorphism well developed, females with distinct illicial rudiment (females of Linophryne with rudiment of hyoid barbel, present as an opaque, wart-like thickening of the skin in specimens greater than about 10 mm SL); metamorphosis delayed in at least some taxa, larvae attaining lengths of 17.5-22 mm SL, specimens in metamorphosis 15-32 mm SL (Bertelsen, 1951:135, 140, figs. 90, 93; 1984:329, fig. 168C-E).

Free-living and parasitic males known for all genera, except Acentrophryne; metamorphosed free-living males with eyes relatively large (6-9% SL in diameter), more-or-less tubular and directed anteriorly, without aphakic space; olfactory organs inflated, moderately to strongly enlarged; anterior nostrils directed anteriorly; number of olfactory lamellae 3-13, but variable among genera; jaw teeth present in Photocorynus and Haplophryne, absent in Borophryne and Linophryne; upper denticular simple or with a short dorsal prolongation, not reaching tip of illicial pterygiophore, lower denticular simple or (in Haplophryne) divided into a bilateral pair; each denticular with a single series of 3-7 upper and 2-13 lower denticular teeth; sphenotic spines prominent in males of Borophryne and in Linophryne subgenus Linophryne, absent in all other taxa; hyoid barbel absent in males of all genera; skin naked, without dermal spinules; parasitic males with somewhat degenerated denticular teeth, eyes, and olfactory organs; belly greatly inflated in mature specimens.

Larvae more elongate than those of most other ceratioids, head generally about 45% SL; skin on head and body moderately inflated; pectoral fins relatively short; subdermal pigment without a dorsal group of melanophores; small rudiment of a hyoid barbel present in largest known female larvae of Linophryne; pointed sphenotic spines present in Borophryne and Linophryne subgenus Linophryne, unlike all other ceratioid larvae.

Key to Metamorphosed Females of Genera of the Linophrynidae

3B. Preopercular spine present (go to 4)

Bertelsen, E. 1982. Notes on Linophrynidae VIII: A review of the genus Linophryne, with new records and descriptions of two new species. Steenstrupia, 8(3): 49–104.

Pietsch, T. W. 1972b. A second specimen of the deep-sea anglerfish, Phyllorhinichthys micractis (family Oneirodidae), with a histological description of the snout flaps. Copeia, 1972(2): 335–340.

Pietsch, T. W. 1974a. Osteology and relationships of ceratioid anglerfishes of the family Oneirodidae, with a review of the genus Oneirodes Lütken. Nat. Hist. Mus. L. A. Co., Sci. Bull., 18, 113 pp.