In Hawaiian waters, this species appears to be a strong vertical migrator and may be a member of the mesopelagic boundary fauna as it seems to be more common off Hawaii over bottom depths of less than 700m than in more offshore waters (Young, 1995). In the tropical eastern North Atlantic, however, this species has a distribution more similar to its congener (see Distribution.)

More details of the description of L. reinhardti can be found here. 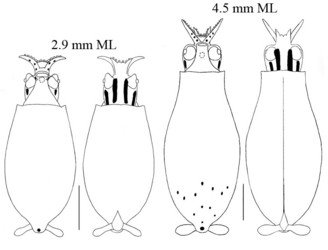 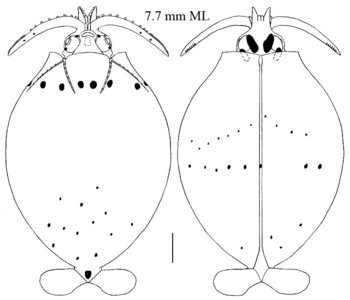 L. reinhardti has a cosmopolitan distribution in tropical and subtropical waters (Nesis, 1982). Off Hawaii, Reid, et al. (1991) and Young (1995) considered this squid to be a member of the mesopelagic boundary community (ie, occurring primarily over bottom depths of less than 700m) in Hawaiian waters. Bower, et at. (1999) examined the distribution of cephalopod paralarvae near Hawaii and found that L. reinhardti paralarvae  to be in a group of "island associated" paralarvae belonging to species that presumably spawn nearshore. The Hawaiian data suggest that in other geographical regions, L. reinhardti may also be land-related in distribution.

Page: Tree of Life Liocranchia reinhardti (Steenstrup 1856). Authored by Richard E. Young and Katharina M. Mangold (1922-2003). The TEXT of this page is licensed under the Creative Commons Attribution-NonCommercial License - Version 3.0. Note that images and other media featured on this page are each governed by their own license, and they may or may not be available for reuse. Click on an image or a media link to access the media data window, which provides the relevant licensing information. For the general terms and conditions of ToL material reuse and redistribution, please see the Tree of Life Copyright Policies.