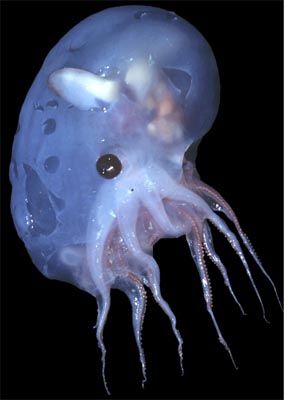 Luteuthis spp. are very fragile, gelatinous, presumably pelagic cirrate octopods whose affinities are uncertain (see Nomenclature) The two species in this genus are known from only three specimens.

The two distinctive features of Luteuthis are the tooth-like structures on the suckers and the shape of the shell.

The genus Luteuthis was established by O'Shea (1999) and placed in its own family, the Luteuthidae. O'Shea and Lu (2002) state that the family is distinguished by the following features:

The presence of a radula is now known be we widely distributed in the Grimpoteuthis. The W-shaped shell is unusual but an intermediate condition is seen in Grimpoteuthis tuftsiGrimpoteuthis). (O'Shea and Lu, 2002, consider this species to be in the Luteuthidae but Collins, in press, considers it a typical The peculiar suckers appears to be a unique feature. The arrangement of accessory glands needs further evaluation. The arrangement of glands is unknown in many species and where known the clear arrangement of the parts and, indeed, their proper identification is often unclear.

We suggest that placing Luteuthis in its own family is premature at present.