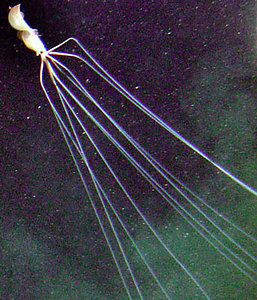 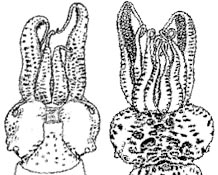 The differentiation of arms from tentacles and the determination of the total number of appendages in Magnapinna videos/photographs are often difficult to determine. Here we have taken three frame-grabs from an MBARI ROV video taken in Hawaiian waters and labeled the arms and tentacles.

This squid has the tips of the right Arm I and left arm IV and left tentacle broken off. The left arm IV has the left tentacle partially cradled in its lateral membrane and this can be recognized in all three photographs. Apparently this Magnapinna uses a lateral membrane in guiding each tentacle as in most chiroteuthids, mastigoteuthids and Joubiniteuthis. The right Arm IV shows the same cradling of the right tentacle in the top left and bottom photographs while the top right photograph shows the tentacle mostly free from Arm IV. The proximal thick portion of arms III are much shorter than in the other arms which can cause these arms to be mistaken for tentacles because of their position if the true tentacles are hidden within the lateral membranes of arms IV. 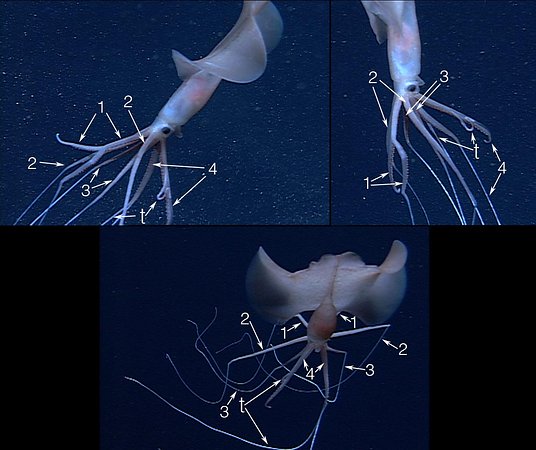 A portion of the MBARI video from with the above images were taken is seen here. 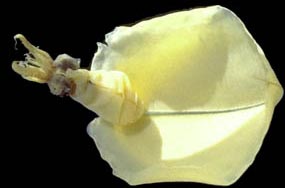 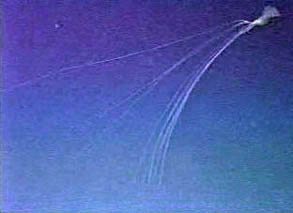 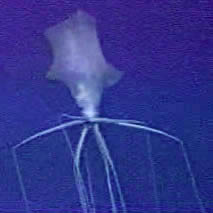 Geographical distribution: Magnapinnids are probably found, at least in temperate to tropical latitudes, throughout the world's oceans.

Vertical distribution: Most magnapinnids have been photographed within a few meters of the bottom at great depths. The following photograph shows a small magnapinnid swimming just above the ocean floor at 4708 m in the Kermadec Trench. This squid appears to be under 100 mm in ML judging from the cross bar which shows a 100 mm distance between black tapes. Although the resolution is insufficient to be certain, the squid appears to not yet have the full development of the slender distal arms. 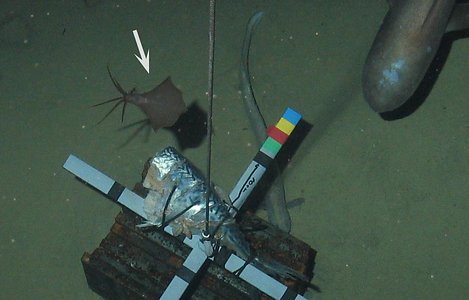 The deepest record for a squid is 4735 m which was another magnapinnid photographed in the western Atlantic off Brazil (Vecchione, et al., 2001).

Other Names for Magnapinna Vecchione and Young, 1998

Page: Tree of Life Magnapinnidae Vecchione and Young, 1998. Magnapinna Vecchione and Young, 1998. Bigfin squid. Authored by Michael Vecchione and Richard E. Young. The TEXT of this page is licensed under the Creative Commons Attribution-NonCommercial License - Version 3.0. Note that images and other media featured on this page are each governed by their own license, and they may or may not be available for reuse. Click on an image or a media link to access the media data window, which provides the relevant licensing information. For the general terms and conditions of ToL material reuse and redistribution, please see the Tree of Life Copyright Policies.