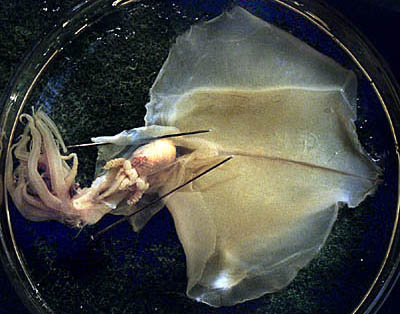 A magnapinnid, illustrated by Hardy (1956) from the South Atlantic and identified as Octopodoteuthopsis, is deposited in the Natural History Museum, London (BMNH). This squid was not recognized as a magnapinnid prior to the work of Vecchione and Young (submitted) due to the slender tentacles which differed greatly from the previously only known species, M. pacifica.

We examined the specimen in the year 2000 before we realized that it belongs to the Magnapinnidae. The brief description above is from some notes we made at the time. The arms and tentacles were badly damaged in capture. The squid is an immature male. The buccal mass is relatively large and the buccal membrane is very reduced.

Vecchione, M., Young R. E. Submitted. The squid family Magnapinnidae (Mollusca; Cephalopoda) in the North Atlantic with a description of a new species.