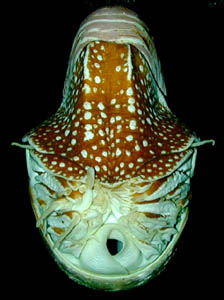 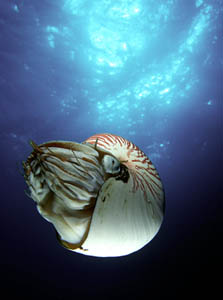 Only these few living species represent this once abundant subclass.

The pearly nautilus is unusual among living cephalopods in having a large calcareous external shell divided into chambers (phragmocone) that are pierced by a siphuncle. The animal lives in the largest and most recently formed chamber. The shell acts as a protective and buoyancy device. The nautilus can withdraw into the shell and seal the entrance with a large tough hood. Buoyancy is controlled by pumping fluid in and out of the chambers using an osmotic mechanism. The osmotic pump must operate against hydrostatic pressure and a depth limit for this mechanism seems to be around 300 m (Saunders and Ward, 1987). It can only exceed this depth for short periods of time. At a depth of approximately 800 m the shell implodes.

Pearly nautiluses are very muscular but slow swimers. They swim by jet propulsion provided by contraction of the large funnel and the "piston action" resulting from withdrawal of the head into the living chamber. They are restricted to the Indo-Pacific from 30? N lat. to 30? S lat. and 90? to 185? W long. (Saunders, 1987). Their numerous tentacles with adhesive ridges are quite different from the 8 or 10 sucker-bearing arms of coleoid cephalopods that are used to grab prey. The pearly nautiluses are partially, at least, scavengers that can hold an occasional windfall of up to 20% of the body weight in their large crop. Some species undergo vertical migrations, moving along steeply sloping bottoms from around 300 m during the day to 100 m at night. One of their predators is their distant relative, the octopus, which is able to bore a hole through the shell and inject a poison.

A list of all nominal genera and species in the living Nautilidae can be found here. The list includes the current status and type species of all genera, and the current status, type repository and type locality of all species and all pertinent references.