Members of Nototodarus are demersal squid found sitting on or swimming near the ocean floor on continental or island shelves and slopes. The three recognized species are found only in the Indo-Pacific region.

A member of the Todarodinae with ...

The hectocotylization of both arms IV is shared with Todaropsis but the latter lacks a foveola in the funnel groove.

The three species of Nototodarus differ by the number of suckers on arms I (over 120 suckers in N. sloanii, 56-100 in N. gouldi, less than 60 in N. hawaiiensis) and  the morphology of the distal third of the hectocotylized right arm IV. 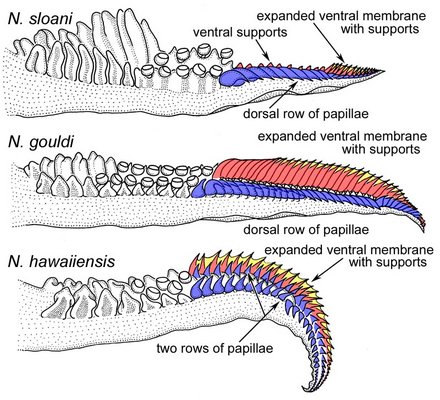 Figure. Side views of the hectocotylized right arm IV of Nototodarus species. Drawing modified from Dunning and Förch (1998).

Page: Tree of Life Nototodarus Pfeffer 1912. Authored by Richard E. Young and Michael Vecchione. The TEXT of this page is licensed under the Creative Commons Attribution-NonCommercial License - Version 3.0. Note that images and other media featured on this page are each governed by their own license, and they may or may not be available for reuse. Click on an image or a media link to access the media data window, which provides the relevant licensing information. For the general terms and conditions of ToL material reuse and redistribution, please see the Tree of Life Copyright Policies.