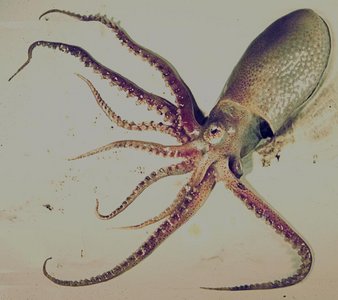 This pelagic species occupies near-surface waters (at least at night) in the temperate regions of the world's oceans. The females are large with a mantle length up to 310 mm (Roper and Sweeny, 1976). The mantle is very muscular and the octopod, presumably, is an excellent swimmer. The ventral and dorsal arms are much longer than the lateral arms. Females of Ocythoe are one of the few known cephalopods with a true swimbladder (Packard and Wurtz, 1994) and the only known cephalopods that are ovoviviparous (i.e., give birth to live young that hatch internally) (Naef, 1923). A pair of water pores at the base of the ventral arms lead to extensive water-filled spaces between the eyes and arm bases. In subadult and adult females the ventral surface of the mantle has permanent ridges formimg a reticulate pattern. Males are dwarfs with a mantle length of about 30 mm. 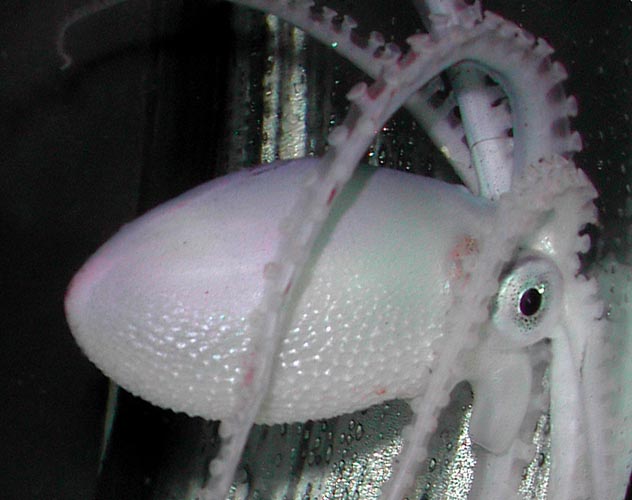 Figure. Lateral view of a young female O. tuberculata, 71 mm ML, in a shipboard aquarium showing ridges and tubercules on the ventral half of the mantle. Photograph by U. Piatkowski, taken aboard the R/V G.O. SARS during the MAR-ECO expedition, 2004, at 50°N, 28°W.

More details about the hectocotylus, water pores and swimbladder can be found here.

A list of all nominal genera and species in the Ocythoidae can be found here. The list includes the current status and type species of all genera, and the current status, type repository and type locality of all species and all pertinent references.

The eggs develop in the long, winding oviducts until hatching. The egg size is 0.9 X 2 mm and the chorion is drawn out into a hollow stalk even though a stalk no longer has a function (Naef, 1923). Eggs in the oviducts number at least 100,000 in a large female (Naef, 1923). Spawning is intermittent as eggs of various stages of development are present in the oviducts at any one time.

Figure. This cut-away drawing of the viscera of O. tuberculata shows the thick mantle muscle, the long, convoluted oviducts covering the ovary, the strong funnel-mantle locking apparatus and the pores to the water channels. Drawing modified from Naef, 1923.

Males are dwarfs and are sometimes found inhabitating the tests of salps as are young females (Naef, 1923; Okutani and Osuga, 1986). Little is known about this relationship.

Figure. Lateral views of a young O. tuberculata, apparently a female, residing within the test of the salp, Tethys vagina. Left - Photograph from off Japan a few hundred meters from shore by K. Osuga (published by Okutani and Osuga, 1986, courtesy of T. Okutani). Note that the salp does not seem to be intact. Right - A drawing, made from the photograph, clarifies the position of the octopod within the salp. Drawing from Okutani and Osuga, 1986.

This species is found throughout the temperate latitudes of the world's oceans (Roper and Sweeny, 1976). This suggest that separate populations exist but the population structure has not been investigated. In the North Pacific large female O. tuberculata have been commonly caught in drift nets set in the upper 10 m of the water at night (M. Seki, pers. comm.); the daytime habitat is unknown.

Other Names for Ocythoe tuberculata Rafinesque, 1814

Page: Tree of Life Ocythoidae Gray 1849. Ocythoe tuberculata Rafinesque, 1814. Authored by Katharina M. Mangold (1922-2003), Michael Vecchione, and Richard E. Young. The TEXT of this page is licensed under the Creative Commons Attribution-NonCommercial License - Version 3.0. Note that images and other media featured on this page are each governed by their own license, and they may or may not be available for reuse. Click on an image or a media link to access the media data window, which provides the relevant licensing information. For the general terms and conditions of ToL material reuse and redistribution, please see the Tree of Life Copyright Policies.