Members of the Ommastrephidae are small (about 10 cm ML) to large (about 100 cm ML), muscular squids that are often the dominant large squids in oceanic and, occasionally, neritic waters.  A number of species are fished commercially. Although the family is very well characterized, placement of species with genera and subfamilies has, in some cases, been controversial. These controversies have often revolved around the importance of absence of a character (e. g., absence of foveola and side pockets from the funnel groove of Todaropsis, a featured shared with Illex) which, without adequate polarization, could be interpreted as a synapomorphy, a symplesiomorphy, or a convergent loss.

1Photophores difficult to detect in some species.
2Defined as presence of knobs and corresponding suckers with smooth sucker rings.

Figure. Ventral view of the funnel groove comparing modifications in two of the subfamilies. Drawing modified from Roper, et al. (1985). 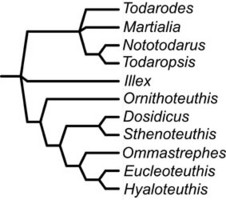