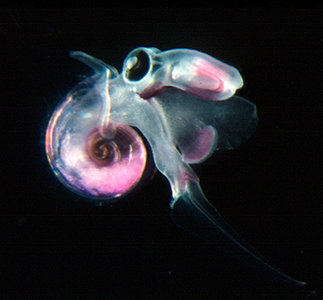 Along with Atlanta peroni, Oxygyrus keraudreni attains the largest size (shell diameter to 10 mm) among the Atlantidae. Body coloration is light bluish-purple, with the color darkening with age. The larval shell is calcareous and displays a distinctive pattern of zigzag-shaped spiral ridges that are evenly spaced and cover the shell surface. The teleoconch is composed of conchiolin, a transparent cartilaginous material, and its surface lacks sculpture. With growth the teleoconch overgrows the protoconch and eventually surrounds it. A shell spire, as seen in all other atlantids, is lacking and the spire region is termed involute. The conchiolin keel is glass-like and has a truncate anterior edge that ends at the shell aperture.

The type c eye morphology is only seen in one other species of atlantid (A. helicinoides) and one carinariid (Cardiapoda richardi). The shape of the operculum is unique among atlantids, broadly triangular, approaching trapezoidal in shape, and lacking the apical spiral part present in all other atlantids. Also unique to the operculum is that when the animal retracts into its shell, only about one-half of the operculum covers the shell aperture. The radula is very large and is triangular in shape. The geographical distribution is cosmopolitan in tropical to subtropical waters.

Page: Tree of Life Oxygyrus keraudreni Benson 1835. Authored by Roger R. Seapy. The TEXT of this page is licensed under the Creative Commons Attribution License - Version 3.0. Note that images and other media featured on this page are each governed by their own license, and they may or may not be available for reuse. Click on an image or a media link to access the media data window, which provides the relevant licensing information. For the general terms and conditions of ToL material reuse and redistribution, please see the Tree of Life Copyright Policies.