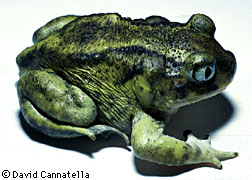 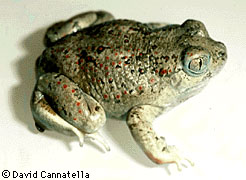 Pelobatidae are the European and American Spadefoot Toads. The content of the family as used here is more restricted than many others use it. The Asian megophryines and pelodytines were recognized as full families, Megophryidae and Pelodytidae, by Cannatella (1985).

Living pelobatids are rotund with short limbs and large eyes with vertical pupils. However, it is possible (but not yet demonstrated) that the morphology of the living forms is convergent, because some fossil pelobatids of the genus Eopelobates are rather gracile, lightly-built animals. In order to burrow, spadefoot toads use the spade, a bony element of the hindfoot capped with a keratinous cover. They do so rear-first into the ground (most burrowing frogs do so rear-first, only a very few such as Hemisus, enter the ground head-first).

The North American species have been placed in either one genus (Scaphiopus) or two (Spea, for the smaller species). Each group is monophyletic, so the division is somewhat arbitrary. However, the two groups are different in morphology and ecology, so recognition of two genera emphasizes the distinctiveness of each.

Pelobates are also well known as fossils from as far back as the Eocene and extend to the present. Scaphiopus is known from the early Oligocene. Macropelobates is from the Middle Oligocene.

The distribution of living members of the family Pelobatidae is indicated in red.

As generally used, Pelobatidae (for megophryines and pelobatines) is not demonstrably monophyletic, because of the ambiguous relationships of Pelodytes. Cannatella (1985) removed megophryids from Pelobatidae. The name Pelobatidae was defined by Ford and Cannatella (1993) as the node that is the most recent common ancestor of living Pelobates, Scaphiopus, and Spea, and all of its descendants. Each of the aforementioned taxa is monophyletic (Cannatella, 1985). Synapomorphies of Pelobatidae include fusion of the joint between the sacrum and coccyx, exostosed frontoparietals, and the presence of a metatarsal spade supported by a well-ossified prehallux.

The definition of this name differs from that used by most other workers, in that megophryines are excluded from Pelobatidae. The extinct subfamily †Eopelobatinae* (Spinar, 1972) is not included in the definition because of uncertainty concerning the relationships and monophyly of that taxon. Some †Eopelobates appear to be more closely related to the living Pelobates than are Scaphiopus and Spea, so the subfamily may be an artifact of placing a group of extinct forms into a taxon. It is a metataxon of uncertain placement, either within Pelobatoidea, or the sister taxon of Pelobatoidea.