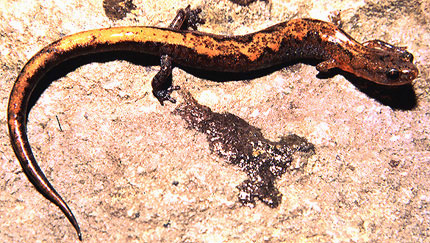 Phylogenetic relationships among the major subgroups of the salamander family Plethodontidae (Lombard and Wake, 1986).

Salamanders of the family Plethodontidae, commonly called "lungless salamanders," are widely distributed in eastern and western North America and Central America, with populations also in South America, southern Europe and Sardinia. The family Plethodontidae is by far the largest salamander family with approximately 250 recognized species (Frost, 1985; Duellman, 1993). These salamanders have figured prominently in experimental studies of the structuring of ecological communities (Hairston, 1987).

The hypothesis that lunglessness in plethodontids evolved as a rheotropic adaptation for existence in cool, fast-flowing mountain streams has been invoked repeatedly (Wilder and Dunn, 1920; Dunn, 1926; Wake, 1966) but has recently been challenged, generating much controversy (see Ruben and Boucot, 1989; Reagan and Verrell, 1991; Beachy and Bruce, 1992; Ruben et al., 1993).

Plethodontid salamanders occupy a great diversity of adaptive zones ranging from strictly aquatic ones to strictly terrestrial and even arboreal ones (Wake, 1966; Larson, 1984). The ancestral life history for plethodontids is believed to be a semiaquatic one, featuring gilled, aquatic larvae that inhabit streams and metamorphosed adults that show varying degrees of terrestriality (see Titus and Larson [1996] for arguments relevant to this hypothesis). Morphological evolutionary patterns and their relationships to adaptive diversification of plethodontid salamanders are discussed by Wake and Larson (1987).

The biphasic life history is observed for most members of the subfamily Desmognathinae and the plethodontine tribe Hemidactyliini. Three species of the subfamily Desmognathinae (Desmognathus aeneus, Desmognathus wrighti and Phaeognathus hubrichti) are strictly terrestrial, however, and have no aquatic larval stage. Many lineages of the tribe Hemidactyliini have experienced the opposite evolutionary change, eliminating the terrestrial adult phase and retaining the morphological and ecological characteristics of aquatic larvae throughout life (a condition termed "perennibranchiate"). Many perennibranchiate salamanders in this group are troglobitic and demonstrate the reduced pigmentation and vision characteristic of many cave-dwelling animals. Both the Desmognathinae and Hemidactyliini occur in eastern North America, with the latter group getting as far west as Texas, where many troglobitic forms are found.

The plethodontine tribes Bolitoglossini and Plethodontini lack aquatic larvae and hatch as miniature adults from eggs laid on land or terrestrial vegetation. The tribe Plethodontini contains woodland salamanders of the genera Aneides and Plethodon, which occur both in eastern and western North America, and the western North American genus Ensatina. Members of all three genera can be found concealed under logs and rocks on the forest floor. Members of the genus Aneides also show varying degrees of climbing ability and associated arboreality (see Larson et al., 1981); Aneides aeneus and Plethodon petraeus (Wynn et al., 1988) demonstrate adaptations for climbing in rock crevices.

The tribe Bolitoglossini occurs in western North America, Central America and South America, with some isolated populations of one genus (Hydromantes) in Southern Europe and Sardinia. This group has undergone an extensive evolutionary radiation in the New World tropics, including highly arboreal and fossorial groups (Wake and Lynch, 1976). Convergent and parallel evolutionary origins of webbing of the feet are observed in the genus Bolitoglossa, associated with arboreality on moist tropical vegetation (Wake and Lynch, 1976; Alberch, 1981). Convergent and parallel evolutionary trends are observed also for elongate, fossorial forms among the tropical genera Lineatriton and Oedipina and the temperate genus Batrachoseps.

The proceedings of a recent symposium on plethodontid salamanders are published in volume 49 of Herpetologica. Because plethodontids are such a large and diverse group, further details of their biology will be developed on pages devoted to the various subgroups of the family.

All plethodontid salamanders are lungless and breathe through moist skin. Plethodontids are unique among salamanders in having narrow grooves between each nostril and the upper lip. Males often have protuberances on the upper lip associated with the nasolabial grooves and a mental gland located beneath the mouth. Costal grooves are pronounced. Most plethodontids are completely terrestrial and lay eggs on land (tribes Plethodontini and Bolitoglossini and parts of the subfamily Desmognathinae). Some have a biphasic life cycle with an aquatic larva and terrestrial adult (most desmognathines and plethodontines of the tribe Hemidactyliini), and others are completely aquatic and permanently larval in form (some members of the tribe Hemidactyliini). Aquatic forms usually inhabit streams.

Detailed Characteristics of the Plethodontidae

Morphology of the Head and Skull

Premaxillary bones may be paired or fused to form a single bone. Bilaterally paired nasal bones each ossify from a single, laterally positioned anlage; long posterior processes of the premaxillae extend between the paired nasal bones and completely separate them. Maxillary bones are present and well developed. Bilaterally paired septomaxillary bones are present. Lacrimal bone is absent. Quadratojugal bone is absent. Pterygoid bones are present in larvae but not in metamorphosed adults. Internal carotid foramina are absent from parasphenoid bones. The angular bone is fused to the mandible. Ear bones feature fusion of the operculum with the stylus of the columella in some species and absence of the stylus in others. Replacement of vomerine teeth proceeds laterally and from the posterior. Teeth have a distinct crown and pedicel. Origin of the levator mandibulae anterior superficialis muscle includes the exoccipital. Nasolabial grooves are a synapomorphy of plethodontid salamanders. Males of most genera have cirri on the upper lip associated with the nasolabial grooves, and also have mental glands.

Characteristics of the Trunk and Vertebral Column

The scapula and coracoid bones of the pectoral girdle are fused to form the scapulocoracoid. Vertebral centra are opisthocoelous. Ribs are bicapitate. Spinal-nerve foramina are present in neural arches of all vertebrae. The pubotibialis and puboischiotibialis exist as separate muscles. Anterior glomeruli of the kidney are reduced or absent.

The diploid number of chromosomes is 26 or 28.

Phylogenetic studies of Larson (1991) and Larson and Dimmick (1993) indicate that the Plethodontidae is a fairly distant relative of the other internally fertilizing salamanders and that this family has no close relatives among extant salamanders. These studies are based on phylogenetic analyses of ribosomal RNA sequences and diverse morphological characters.

The relationships among the subfamilies and tribes of plethodontid salamanders are based upon a cladistic analysis of 30 morphological characters by Lombard and Wake (1986), with particular attention to evolution of the tongue and related structures. Monophyly is reasonably well established for the subfamilies (particularly the Desmognathinae) and the plethodontine tribes, but the relationships among the three plethodontine tribes are more tentative. The topology depicted above is the hypothesis favored by Lombard and Wake (1986).

Beachy, C. K. and R. C. Bruce. 1992. Lunglessness in plethodontid salamanders is consistent with the hypothesis of a mountain stream origin: A response to Ruben and Boucot. American Naturalist 139: 839-847.

Larson, A., D. B. Wake, L. R. Maxson and R. Highton. 1981. A molecular phylogenetic perspective on the origins of morphological novelties in the salamanders of the tribe Plethodontini (Amphibia, Plethodontidae). Evolution 35:405-422.

Titus, T. A. and A. Larson. 1996. Molecular phylogenetics of desmognathine salamanders (Caudata: Plethodontidae): A reevaluation of evolution in ecology, life history, and morphology. Systematic Biology 45:451-472.

Wake, D. B. 1966. Comparative osteology and evolution of the lungless salamanders, family Plethodontidae. Memoirs of the Southern California Academy of Sciences 4:1-111.

David Heyse, Richard Highton and Todd Jackman contributed to the preparation of this Tree of Life page.