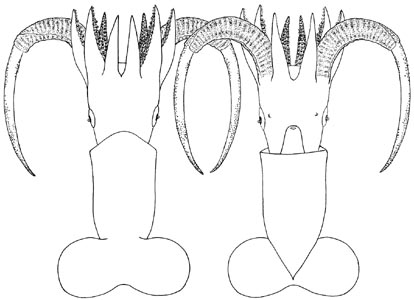 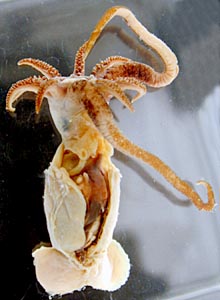 Promachoteuthis sulcus (first known as Promachoteuthis sp. C on this page) is known from a single, small (25 mm ML, sex unknown) but distinctive individual from great depths in the south Atlantic Ocean.

Figure. Ventral and dorsal views of the fins of P. sulcus. Photograph.

More details of the description of P. sulcus can be found here.

Clubs were slightly abraided so the number of suckers in a transverse series could not be determined. The largest number of those present was 12 suckers across. The specimen is an immature female. The mantle was cut open prior to fixation by a previous investigator. The label in the specimen jar states that the ML is 40 mm; the squid currently measures 25 mm ML.